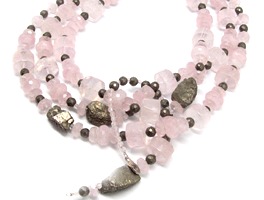 Pink Quartz / Quartz Rose1 is the latest from niche line Olivier Durbano, and joins the other fragrances in his Bijoux de Pierres Poèmes series. Like the others, it's named for a semi-precious stone that Durbano uses in his jewelry. So far none of the stone-fragrance pairings in the collection have really resonated with me in any way, but this one is obvious enough (pink = rose) that even I get it.2

Pink Quartz is supposed to be a spicy chypre, and who knows, perhaps it is, although it does not smell like either a classic or a modern chypre to me. Under my own idiosyncratic (and somewhat random) classification system, it goes in the "rose + saffron" drawer, where it is far from lonely, rose + saffron combinations being rather thick on the ground lately. The opening is briefly sparkle and light, then it's jammy-rich and spicy, and leans towards the Washington Tremlett Black Tie / The People of the Labyrinths A.Maze school rather than more transparent efforts like L'Artisan Safran Troublant. (The notes for Pink Quartz: bergamot, pink grapefruit, Somalia oliban, saffron, ginger, Palma rosa, Damascus rose, Indian rosewood, Indian absolute rose, grey amber, patchouli, myrrh, benzoin and white musk.)

Black Tie and A.Maze (and Czech & Speake's Dark Rose and By Kilian's Rose Oud and Juliette Has A Gun Midnight Oud and countless others) take off down the oud path, some more so than others. Pink Quartz goes for a paler wood and incense; after the spicy-rich opening, it takes on a more delicate, airy character, and the rose fades from jammy to dewy and fresh — something closer to rosewater. The incense, which has been hanging around from the beginning, now comes more into focus, and this pale rose-y incense is what lasts for the duration.

It's a lovely fragrance, probably unisex (if you're a man and you'd wear any of the other rose + saffron scents I've named, you'd probably wear this one). It did not move me to buy, but it's worth sampling, and if you're an incense fan and you haven't tried the others in the Olivier Durbano line, you might as well get a set. My favorite, and the first one I'd snap up if the line ever found its way to the bargain bin at TJ Maxx (yeah, not likely): Black Tourmaline (with Pink Quartz coming in second). If you have a favorite from the line, do comment.

Even more rose + saffron: Odori Zafferano, Ormonde Jayne Ta'if, Agent Provocateur. There's also Amouage Tribute, which I have not smelled, and several of the Montales + a few from Les Parfums de Rosine.

1. The fragrance is called Pink Quartz in the English press materials and Quartz Rose in the French. Confusingly enough, I think most English speakers refer to this stone as "Rose Quartz", but at least one source says that "Rose Quartz" and "Pink Quartz" are two different stones.

2. From the press materials, in case anyone wants to know more about the stone: "A fundamental stone of universal love and of infinite compassion, compassion towards oneself and towards the Other. The Pink Quartz is linked to heart "chakra". It opens on dreams, it is inspiring, leading to the source of inner peace, of absolute calm and happiness. From the stone to the flower, a love ritual of healing, a sacred procession, a conversion ceremony leading to such essential qualities as purity, spirituality and compassion. The rose, whether considered among minerals or taken in the flora, remains a powerful symbol at the crossroads of our human emotions."