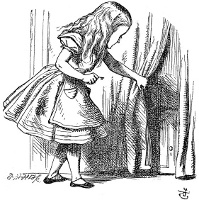 Ten years ago it would have been impossible for most of us to have become as absorbed by perfume as we are now. Ten years ago if we'd stumbled across a bottle of Guerlain L'Heure Bleue and were fascinated by its combination of old-fashioned femininity and offbeat melancholy, we might have trolled through the perfume counters at department stores in big cities to smell other Guerlains, then tried in vain later to remember what we smelled. Most of us wouldn't have had anyone to send us samples of Balmain Vent Vert and whisper how it has changed over the years, or tell us about the surprisingly terrific old fragrances at the Estée Lauder counter, or introduce us to Serge Lutens, who — at least stateside — we may not otherwise have encountered.

The internet changed all that. We can share impressions and read reviews of perfumes then swap samples to see if it's worth ordering. We can find our Evil Scent Twins so we know what to avoid — or try. And we can meet all sorts of fascinating people.

But there are drawbacks, of course. In response to last week's review of Hermès 24, Faubourg, one commenter mentioned the perfume had been her entrée to the fragrance "rabbit hole", and I knew just what she meant. The internet has made it easy for those of us who can get a little compulsive about perfume to go hog wild. I went from three bottles of perfume five years ago to near a hundred now — and that's not counting decants. Rabbit hole indeed.

My ticket down the rabbit hole was Frédéric Malle Noir Epices. I'd read about it in a magazine, then tried to find information about it before a trip to Paris several years ago. I took Frédéric Malle's online survey, which providentially recommended Noir Epices and Le Parfum de Thérèse. When I arrived at my hotel in Paris, I was mortified to discover I'd accidentally packed my bedtime reading glasses — vintage pink cat's eye glasses with rhinestones — and my eyes were too shot after the all-night flight for contact lenses. Sporting the pink glasses and red eyes, I walked through the spring rain to the Frédéric Malle store on the rue de Grenelle and bought a 100 ml bottle of Noir Epices. A few months later I discovered Makeupalley and swapped the bottle away (I was crazy!) but received in return lots of decants. Researching the decants led to Now Smell This which led to niche and vintage perfumes which led to crossing dinner reservations off my list in favor of something from Comme des Garçons and spending my lunch hours prowling thrift stores for vintage perfume. And here I am.

How did you find your way to Now Smell This and — if you've made the leap — down the rabbit hole?