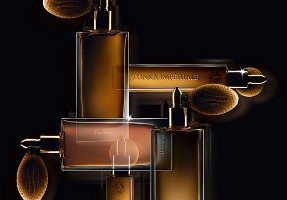 I am not passionate about Guerlain's L’Art et la Matière line: so far, they've been (mostly) nice, but my wallet does not quake in fear when a new one is launched, as it does when it hears of an upcoming Hermessence. My favorite so far has been the lovely Bois d'Armenie, by perfumer Annick Menardo, but despite the fact that I've been through a few samples and small decants, so far I've not been moved to buy it.

The seventh and newest in the range, Tonka Impériale, was developed by Guerlain house perfumer Thierry Wasser. As Wasser also did the only one of the group that I seriously disliked, Iris Ganache, I didn't really get excited about Tonka Impériale until I started seeing glowing reviews. So here I am, joining the bandwagon rather late: this is really wonderful stuff.

Tonka Impériale is a gourmand oriental, and was reportedly inspired (in part) by the construction of Jicky. I've seen numerous mentions of L'Heure Bleue as well, but it doesn't really matter unless you're a serious Guerlainophile who must find a historical antecedent for each modern release — Tonka Impériale is not a grand perfume in the classic manner; it's very decidedly a modern niche fragrance, and it fits perfectly into the L’Art et la Matière box.

Tonka Impériale starts quite boozy and rather rich, and for a moment, I thought it was perhaps another take on the Spiritueuse Double Vanille theme. No, it veers off in other directions shortly: a bit of citrus, something strongly herbal and aromatic (that only registers as rosemary because I know it's listed in the notes), then loads of bitter almond, then dry hay + dry tobacco. By the 15 minute mark, it's foody and sweet; Sylvaine Delacourte of Guerlain describes it as "between gingerbread and chocolate", and to that I'd add amaretti cookies drizzled with honey. If that sounds overwhelming, I'll add that the richness of the opening does not last — it feels nearly transparent on skin, and the bitter and spicy elements counter the sugar nicely. It has less of a "vanilla comfort scent" feel than Spiritueuse Double Vanille, and after hitting a high point on the sugar scale at around 40 minutes, it slowly gets drier and woodier as it continues to develop.

So yes, I'd very much like a bottle. But $235? I have long used the Hermessences as a kind of benchmark — so long as I can get a 100 ml Hermessence for $180, I don't see why I should ever pay more for anything. Except that they're not $180 — I just checked. They're $235. Ouch.1 And now that I think of it, I'm pretty sure others have already pointed that out to me in the comments, so obviously I want to forget. It's a funny world, isn't it, when the Serge Lutens line is now the great bargain in niche perfumery? And hey, L'Artisan Parfumeur's prices aren't looking so bad either.

1. Although I will note that the great thing about the Hermessence line is that you can get any of them in 15 ml for $36 as part of the discovery sets (four 15 ml bottles for $145).