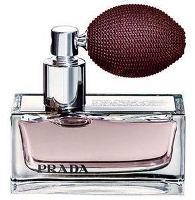 Like Calvin Klein's Euphoria Blossom, Prada Tendre was developed to perform in the lucrative Asian market where heavy fragrances do not sell, and again as with Euphoria Blossom, its olfactory relationship to its parent fragrance is not entirely obvious on first sniff. Mind you, the original amber accord is still there, but it is no longer the star of the show: this is a fresher, sweeter and fruitier fragrance, and the florals are given considerably more prominence once the sharp citrus top notes fade. The base is heavier on the woods, lighter on the amber and patchouli.

It is a perky, summer-y fragrance, much younger in spirit than Prada or Prada Intense, and to my nose, more girly, less sultry. It is also, as you would expect, softer. I said yesterday that neither of the initial Prada releases smelled strikingly unconventional or original, but then, neither did they smell blatantly commercial. Prada Tendre most certainly veers closer to smelling blatantly commercial: it is a considerably more pleasant and less distinctive fragrance than either Prada Eau de Parfum or Prada Intense, and I would guess that it is hoped that it will capture not only the Asian market, but also a piece of the youth market in the United States.

Tendre does not suit me at all — the early stages are sweeter than I like, the later stages, too soft and indistinct to be of interest. But it is a very wearable scent, and if I had to guess, I'd say it will find a much larger audience than Prada or Prada Intense.

Prada Tendre is an Eau de Parfum. It is available now at sephora.

Review of Prada Amber Pour Homme to follow on Sunday or Monday...