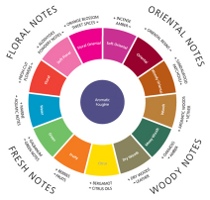 Fragrance families cause a good deal of confusion, even among seasoned perfumistas. Two experiences, both involving the fruity floral category, illustrate the problem.

Some time later I held a poll asking readers to name their favorite fruity floral perfumes. While most of the suggestions were, in fact, fruity, a rather large percentage of them were not, in fact, fruity florals. And that introduces the second point I'd like to make: you cannot determine the fragrance family just by the noticeable presence of certain notes, either.

What are fragrance families, anyway, and why should you care?

And why should you care? Well, the most common use of the classifications is to help people find fragrances they might like without wasting time smelling things that aren't to their taste, or, as Marie Claire puts it, "Each fragrance family has a unique personality and, instinctively, you will prefer fragrances from some and dislike ones from others". You know all those automated systems that ask what fragrance you like, then suggest some others you might like? Those are all based on fragrance family. It's also the reason that many sales associates ask what your favorite fragrance is, although in practice, what they suggest after you answer is not always from the same fragrance family.

Many people, of course, like fragrances from more than one family, and some perfumistas like fragrances from all of the fragrance families. Still, knowing the fragrance family can be very helpful simply in that it might give you some clues as to a fragrance's general character. Let's say that you know that Brand X is coming out with a new fragrance, and the notes are mandarin, cardamom, jasmine, amber and musk. As we already know, that's probably not a complete list of notes, but even if it was, it wouldn't tell you much about what the scent might smell like. If you knew that it was a citrus, say, or an oriental or a floral, that might help you decide whether or not it was something you wanted to try.

What are the families?

The next wrinkle is that there is more than one classification system in use. The best known is from Michael Edwards, who has been classifying fragrances since 1983. His yearly editions of Fragrances of the World (you can see the 2010 book announcement here) provide a reference guide for consumers and retailers, and variations of his system are in use at stores like Sephora. Edwards uses four general categories on a "fragrance wheel": fresh, floral, oriental and woody (see image above). Each of those categories has sub-categories; including the category aromatic fougere, which is in the center of the fragrance wheel, there are 14 basic categories, and then there are further sub-categories under each of those. Two popular categories, chypre and fruity floral, do not, strictly speaking, exist in this system. Chypres are usually classified under the "Mossy Woods" category, and fruity florals under the more general term "Fruity" or under the fruity subgroup of the "Floral" category.

You can read basic explanations of the Michael Edwards fragrance families at the Art et Parfum site.

You will see other systems in use as well, and many retailers use their own adaptations.

How can you learn the fragrance families?

Simply put, there isn't any really good way to learn the fragrance families other than to smell. If you're one of those perfumistas who keeps notes as you test new fragrances, you might try writing down the fragrance family at the same time, and that way, eventually you'll learn to recognize the general characteristics of each family. If you want to know which family a fragrance is in, there are a number of websites you can consult, including the fragrance directories at Basenotes, Osmoz or The Fragrance Foundation.

A side note on chypres

No other family causes more confusion, or perhaps more accurately consternation, among modern perfumistas than the chypre family. The classic chypre was descended from François Coty's Chypre, a 1917 fragrance named for Cyprus and featuring a mossy base and notes of citrus, patchouli and amber. Later chypres used a similar structure. Five years ago, you could tell someone what a chypre was by example: smell Guerlain Mitsouko and Christian Dior Diorella to understand a fruity chypre, Piguet Bandit and Christian Dior Diorling to understand a leather chypre, Jean Couturier Coriandre or Hermès Caleche for an aldehydic chypre, Christian Dior Miss Dior for a green chypre and Caron Yatagan for an aromatic chypre, and so on and so forth.

Many of those fragrances have now been reformulated, in some cases because of new restrictions on oakmoss, in others, for unrelated reasons. Recent fragrances advertised as chypres have little in common with their forebears — often nothing more than some patchouli or amber in the base — and most of them would have been classified under the woods category in olden times. Why the fragrance industry wants to keep using the term chypre is something of a mystery — it can't be much of a selling point with the general perfume consumer, who doesn't know what it is until they're told, or with sales staff, who often don't know what it is either, and who frequently can't pronounce it. But clearly they do want to go on using it, as it appears frequently in press releases. I can only say that any system that classifies Miss Dior and Miss Dior Chérie in the same fragrance family is arguably no longer primarily concerned with being helpful to consumers.

Note: top image is via Fragrances of the World.

1. Of course, you also can't tell if a fragrance is any good by knowing the fragrance family, and as long as we're on the subject, I'll go on record for the zillionth time as saying there is nothing inherently wrong with fruity florals. Some of my best friends are fruity florals, and there have been whole summers where I've worn virtually nothing else.