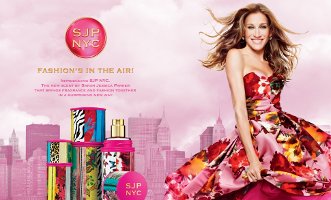 In the case of actress Sara Jessica Parker, Coty has had varied experiences. Lovely, which was easily relatable to Parker’s television persona, was a success. Covet, meanwhile, which tapped into a different side of the celebrity, proved a bigger challenge. [Catherine] Walsh explained that Coty’s next launch with Parker, SJP NYC, again focuses on the personality that the consumer wants.1

And the personality that the consumer wants, apparently, smells like strawberry. I suppose I should stop here and admit that I was never a fan of Sex and the City, although I did sit through several episodes at the urging of friends who found the show mesmerizing.2 It was not for me. Still, Sarah Jessica Parker has expressed surprise about the strawberry note in SJP NYC,3 and I admit I was surprised too — is the fan base for Sex and the City that young? I wouldn't have thought so.

So, SJP NYC is a strawberry-based fruity floral. You know the drill: sweetish, red berry top notes with a touch of sharp citrus, a clean and pale musky base, and a bunch of indeterminate, vaguely exotic flowers in between. There's a peach-apricot jam undertone in the heart, but the whole thing isn't nearly as sweet as it might have been — and on skin, it isn't nearly as Jolly Rancher-like as it is in the magazine scent strip I tried. It's comparable to Ed Hardy Woman or Ralph Lauren Ralph Wild — if you liked either of those, there's a good chance you'll like SJP NYC too. 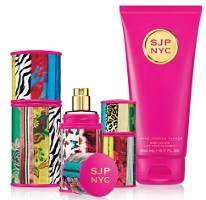 Whatever you might think of the fragrance itself, the packaging is clearly a major step down in terms of what Coty has done with the Sarah Jessica Parker line so far. It's basically a plain glass bottle inside of a (reusable!) plastic canister lined with a paper label meant to mimic fabric designs. It looks inexpensive, and luckily, it is (see prices below).

1. From CEW Fragrance Rainmakers: Creating Scent Success in a Crisis at GCI.

2. I never saw the first movie, but Anthony Lane's review in the New Yorker (6/9/2008) nicely sums up my feelings towards the show:

On TV, “Sex and the City” was never as insulting as “Desperate Housewives,” which strikes me as catastrophically retrograde, but, almost sixty years after “All About Eve,” which also featured four major female roles, there is a deep sadness in the sight of Carrie and friends defining themselves not as Bette Davis, Anne Baxter, Celeste Holm, and Thelma Ritter did—by their talents, their hats, and the swordplay of their wits—but purely by their ability to snare and keep a man. Believe me, ladies, we’re not worth it. [...] I walked into the theatre hoping for a nice evening and came out as a hard-line Marxist, my head a whirl of closets, delusions, and blunt-clawed cattiness.

The reason it surprises me is because I have this idea in my head that strawberry is very youthful and juvenile, but this fragrance doesn’t smell candy sweet. It amazes me that this essence of strawberry mixes so beautifully with the more sophisticated floral notes and the musks that I love and will always have as part of my fragrances. In a million years I would never think, ‘Let’s work around strawberry.’

Sarah Jessica Parker also notes in this video on YouTube that...