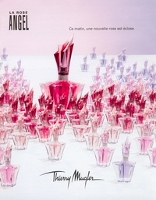 Rose Angel, the fourth (and reportedly the last) fragrance in the Angel Garden of Stars series from Thierry Mugler, will debut in April.

It was created by perfumer Olivier Cresp and has notes of Bulgarian rose and patchouli. (via cosmeticnews)

Have a great Friday! I'll be back with a perfume review tomorrow afternoon.

"It's a saga, with the best one for the end to finish the story," Cresp explained, adding he reread Angel's formula to incorporate a strong combination of Bulgarian rose oil notes with patchouli he originally used. Cresp said the scent has a fruitiness like a plum, the harmony of patchouli and rose and traces of pink pepper.