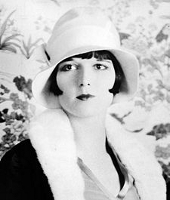 As a kind of unicorn chaser to the very expensive Un Coeur en Mai I discussed on Tuesday, today I'm looking at a couple of guilt-free bargains from Les Garçonnes, the most recent collection of "CrazySticks" from Crazylibellule and The Poppies. They've recently* raised the price of these (adorable) solid twist-up perfumes, but the jump from $16 to $18 is one I can live with.

My hands down favorite of the new bunch is Chère Louise, which was reportedly inspired by silent film actress Louise Brooks. It's a lovely darkish woods (the notes: hyacinth, rose, pepper, iris, saffron, patchouli and gaiac wood). The hyacinth and rose stand out most in the very opening, after that, it's mostly about the woods (Louise or no, I think a man could easily wear this). It's slightly peppery, with a very clean patchouli, and the iris and saffron together add a soft, creamy spiciness. It's not quite in the wood pudding category, but very nearly.

My overall favorite of the Crazylibellule line is still the wonderful Encens Mystic (from the Shanghaijava collection), but Chère Louise is a close second. It's probably more of a cool weather than a warm weather scent, but given the incredibly temperate weather we're having this summer, I've found it perfectly fine to wear in July. I would swear it smells just like some other scent that I can't pinpoint, but for $18, who cares?

Hommage à Gabrielle is a tribute to Gabrielle "Coco" Chanel. On first sniff, it didn't interest me much — a  pale floral, pretty enough but not that interesting — but the dry down is lovely: a woody incense lightly sweetened with vanilla. The longer it's on skin, the more I like it. Enough vague, sort-of-jasminey floral lingers on to render this one more feminine than the Chère Louise, and it's light enough that I should think you could wear it in any weather.

Crazylibellule and The Poppies Chère Louise and Hommage à Gabrielle were developed by perfumer Olivia Jan and are available in 5 gr perfume solid; $18 each. They stay fairly close to the skin, and they do leave a waxy residue — it doesn't bother me in the least, but if it would bother you, consider yourself warned. For buying information, see the listing for Crazylibellule and The Poppies under Perfume Houses.

* At least, I assume it was recently. I haven't really been paying attention.