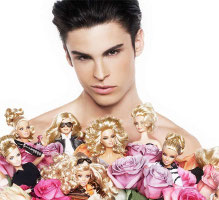 Halloween afternoon, the ten-year-old neighbor boy came by looking to borrow a wig. He had decided to dress as a girl for a Halloween party. His parents, who give out organic apples to trick-or-treaters and keep their own chickens, don't have much use for high heels or lipstick. My house is a relative haven of girliness. While I didn't have a wig to give the boy, I filled a bag with clip-on earrings, rhinestones, a sequined cardigan, a pair of gold slides, and a tube of Revlon Temptress.

My hand paused at a bottle of Yardley Red Roses Eau de Cologne. "Perfume?" I asked and unscrewed the top for him to smell. "Uh, I guess it's o.k.," he said. I knew his response translated as "no way I'm wearing that", so I didn't push it. But it led me to wonder, what makes a good feminine fragrance for a man?

As is true for many women, I've been wearing masculines almost as long as I've worn perfume. But I don't have many men in my life who wear scent at all, let alone fragrances marketed to women. I wish I did. Smelling the same old citrus or fougère or "fresh" aftershave on men is as predictable and exciting as khakis and a button-down shirt.

Some feminines seem tailor-made for men. Leathery scents, such as Piguet Bandit and Chanel Cuir de Russie, may be marketed to women, but in my opinion they're as unisex as fragrance gets. Assertively spicy fragrances, including Yves Saint Laurent Opium, L'Artisan Parfumeur Tea for Two, and at least half of the Serge Lutens line are risk-free choices for men. Green chypres, such as Balmain de Balmain, Givenchy III, and Parfumerie Générale Corps et Ames would also be easy for men to wear.

I can imagine that feminines with a forceful structure would work well on men, too. For example, Piguet Fracas on a confident man would turn heads. Gentle florals or soft ambers would be marvelous on men in suits. I'd love to smell a touch of Jean Patou Joy parfum, Estée Lauder Private Collection Amber Ylang Ylang, or a tender jasmine on a man in pinstripes.

It seems like powdery or strongly fruity feminines might not play as well on men — heck, they're tricky on women. For instance, Molinard Habanita might be risky for its powder, as could be Guerlain Insolence for its fruit.

Early on Halloween evening, the neighbor boy stopped in to model his get up. He'd found a long, blond wig that his sister styled into a hairdo worthy of Jessica Simpson. He topped a full petticoat with the pale sequined cardigan, wore my mid-1950s aqua necklace and earring set, and blushed a quarter-sized round of Temptress on each cheek. He stood awkwardly in the living room and smiled. He was right. Red Roses wasn't it at all. He was Aquolina Pink Sugar all over.

Note: image is from the "Barbie & Ken" exhibit by Karl Lagerfeld, via Colette.

See also: 5 Perfumes for: Men Who Want to Borrow, Masculines and feminines