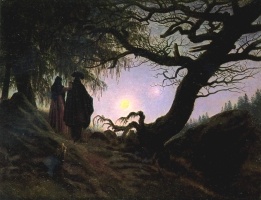 When I heard that Bath & Body Works would be releasing a fragrance called “Twilight Woods,” and that this fragrance would evoke “a romantic walk in enchanted woods,” I imagined a blend of pine and cedar, a few drops of resin, and an ozonic note hinting at an oncoming snowstorm. When I later saw the list of notes, I realized that it would actually be a woodsy-fruity gourmand, with “top notes of Juicy Berry, Sparkling Mandarin, and hint of Coconut, heart notes of Creamy Frangipani, Soft Mimosa, Wet Honeysuckle, Wild Freesia, and Apricot Nectar, and basenotes of Oud Wood, Skin Musk Captive, Vanilla Milk, and Warm Woods.”

Twilight Woods is the newest addition to Bath & Body Works’ Signature Collection line, in keeping with the recent string of more complex, “abstract” fragrances (such as P.S. I Love You, as opposed to yet another Cucumber Melon type). It was developed by perfumers Harry Fremont, Jane Konnyu, and Honorine Blanc.  This fragrance could just as easily have been named "Twilight Orchard," because a ripe apricot note runs throughout its development, starting off in a bright, syrupy vein and then gradually turning more subdued, like candied fruit. A creamy heart of frangipani petals and soft musk surrounds the apricot note after a short while, and a light, milky vanilla-coconut accord appears later in the dry down. Overall, this is a sweet scent (although nowhere near as tooth-achingly saccharine as Warm Vanilla Sugar), but it feels smooth and well-rounded.  The lingering traces of the fragrance, when the warm, woody notes finally become more noticeable and mesh with the ripe fruit aspect, are surprisingly polished (and long-lasting) for an Eau de Toilette that costs less than $30. 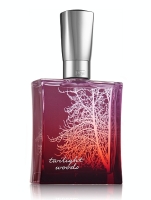 Overall, Twilight Woods fits neatly into the recent trend of smooth, accessible fruity-woods fragrances. Its apricot note reminds me of the recent B de Boucheron, which included orange blossom, osmanthus, apricot, and sandalwood. It doesn’t have the spiced-honey accord of Estee Lauder’s Sensuous, which also featured mandarin and “molten woods,” but it might appeal to similar tastes. If you're a fan of Calvin Klein Euphoria, and you can imagine it with apricot rather than pomegranate, you might also like Twilight Woods. However, if you were hoping for something more along the lines of Serge Lutens Fille en Aiguilles or Kiehl’s Forest Rain, Twilight Woods probably won’t appeal to you much. And as for the inclusion of oud, which is shaping up to be the “it” note of late 2009:  if (like me) you don’t care for oud, don’t worry, because it isn’t noticeable here. If you’re an oud-lover, on the other hand, stick with the Montale line, or wait for L’Artisan Parfumeur’s forthcoming oud fragrance.

Lastly, in addition to joining the “sensual woods” trend, Twilight Woods is timely in another way: although it has no connection to the mega-successful books and movies of the “Twilight” saga, its release happens to fall just before the opening of the second movie in the series. I have a feeling that this fragrance is going to be very popular in its own right, even without the teen vampires, and if you’re looking for an autumnal-feeling comfort scent, you may want to give it a try. If Twilight Woods doesn't literally smell like a moonlit forest, maybe it suggests all the accessories to an evening walk in the woods, instead: hot cider or a dish of warm fruit cobbler before you head outdoors, a soft wool sweater or a cashmere scarf to keep off the chill, maybe a glass of red wine and a glowing fire in the fireplace when you return home.

Bath & Body Works Twilight Woods Eau de Toilette sells for $29.50 for 75 ml; an 8.5 ml roll-on is $7.50. The Twilight Woods scent is also available in a range of accompanying body and home fragrance products.

Note: top image is Man and Woman Contemplating the Moon by Caspar David Friedrich via Wikimedia.