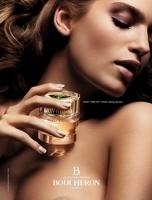 After giving it a lot of thought, I've figured out who best personifies Boucheron's B de Boucheron: Bree from the television show Desperate Housewives. Like Bree, Boucheron B is restrained, feminine, bourgeois, and conventional — yet with an eye on current trends. B is middle-aged, but has the smooth, porcelain skin of a girl. Oh, and they share the same initial.

B de Boucheron honors the 150th anniversary of the Boucheron jewelry house and the 20th anniversary of its first fragrance, Boucheron for Women. According to an interview with Ursula Wandel, the perfumer who created B, B contains 20 natural products*. It's also more expensive than the rest of Boucheron's fragrances. B was released in 2008.

Osmoz describes B as having top notes of orange blossom and rose; a heart of osmanthus and spices; and a base of cedar, sandalwood, and patchouli. The card with the manufacturer's sample of B adds pink peppercorn to the mix. Osmoz also says that B is "light, luminous, inspired by emeralds" (Bree would look great in emeralds, by the way). To me, those notes spell heaven. The leathery peach of osmanthus with spices — maybe coriander! — sandalwood and patchouli? And yet light and luminous? A must smell.

On the skin, B opens with a large helping of apricot-suede osmanthus, riding a tidal wave of aldehydes. A touch of fresh rose rounds out the edges of the osmanthus, but the fruity scent of osmanthus continues at least two-thirds of the way through B's lifespan. A dusting of strangely neutered pepper adds a little shape to the fragrance, and the spices and patchouli are so subtle that I can't pick them out. At this point, B occupies a narrow slice of the olfactory musical scale, somewhere in the mid and upper register of a flute.

Soon the osmanthus sails into a woody-musky dry down, and this is where I really run into trouble. It's the same woody-musky drydown that is showing up all around town these days, in everything from Lanvin Rumeur to D&G The One. This smells buzzes in my brain like a gallon jar of bees and can make a migraine faster than listening to the Chipmunks sing Christmas carols. And it's mighty persistent.

If I were looking for something similar to B — an aldehydic floral with subtle fruitiness and a gentle wood in the base — I'd probably choose Givenchy L'Interdit. At the same time, I think B would definitely suit the right sort of person, but that person probably doesn't drive a ramshackle 1986 pickup truck, often wear incidental dog hair, or adore film noir. In other words, that person isn't me. She's a lot more like Bree.

Boucheron B de Boucheron comes in 15 ml bottles of Parfum; 30 ml, 50 ml, and 100 ml bottles of Eau de Parfum, and in matching body products. The Eau de Parfum bottle is satisfyingly heavy and compact. My sample came from Nordstrom, but B is available at other higher-end department stores, too.