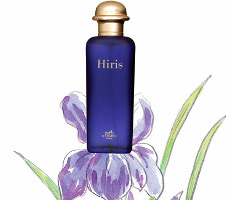 Hiris was released by Hermès in 1999. The name refers to the iris flower, but also to the goddess Iris, who like Hermes was celebrated in Greek mythology as a messenger of the gods. The fragrance was created by nose Olivia Giacobetti, who used iris in the top, heart, and base notes, along with neroli, carrots, coriander, hay, rose, ambrette seeds, almond wood, cedar, honey, and vanilla.

The opening notes are simply stunning: crisp, dry and peppery iris, with lots of dirt-caked roots and greenery. I did not recognize the carrot note until I smelled L'Artisan Fleur de Carotte, and so learned what a carrot translated into perfumery smells like. Yes, there is carrot in Hiris too, although only for a brief while. As it dries down, the high pitched, almost metallic hum of the top notes calms, and the hay and wood notes intensify, along with a tiny whisper of rose.

Like many Giacobetti fragrances, it feels light and tranparent, like cool air is floating over the heavier, warmer notes of dirt, roots, and bark. Giacobetti's genius lies in the fact that she always seems to accomplish this without using a big ozonic note: her perfumes never smell like air freshener. The far dry down retains some of the earthiness, but is softer, more delicate, with restrained sweet notes. There is just the right amount of powder to lend a velvety, elegant finish.

It is an Eau de Toilette, and while the lasting power is good, it is not fabulous. I would love to see an Eau de Parfum version, but I doubt Hiris is part of the long term expansion strategy at Hermès. It is widely available at the online perfume discounters; perfumebay has a 100 ml unboxed tester for $35.90.