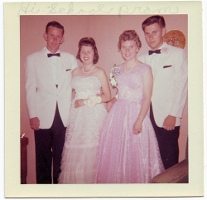 In my neighborhood vintage clothing store, shopping for prom dresses is well underway. With the downturn in the economy, the relative bargain of a vintage dress looks good to mothers who might otherwise turn to the mall. High school girls seem to like vintage dresses, too. A few want classic 1950s prom dresses with big, tulle skirts, and there will always be fans of the Audrey Hepburn little black dress, but 1980s prom dresses are astonishingly popular. That's right — shiny mauve, electric blue, and shimmering emerald green dresses with a smothering load of ruffles and poufs are flying out of the store as fast as the owner can bring them in. Which brings me back to my own 1980s prom, forever linked in my mind with Babe Eau de Toilette.

I didn't wear a store bought dress to my prom. Instead, my grandmother ran up some yellow calico and dotted Swiss lace on her sewing machine, and I went to the prom dressed like the lovechild of Little House on the Prairie and Moulin Rouge. Still, I thought I looked pretty good, especially compared to the Japanese exchange student, Yumi, who lived with us. My grandmother had also sewn Yumi's dress, not realizing that orange wasn't her best color. Yumi had put on some weight adjusting to American food and looked something like a chiffon pumpkin.

When we showed up at the hotel where the prom was held, right behind us in line was the chic Renee. She wore a black cocktail dress and heels, and her date looked equally sophisticated. He was even able to grow a mustache. I knew immediately I had miscalculated, no matter how much studying of Teen magazine I'd done. My aura of Babe was little comfort when Renee undoubtedly wore something devastatingly adult, like Revlon Ciara or even — gasp! — Chanel No. 5.

The rest of the evening was a bust. I was in a foul mood. My date didn't care, since he was my best friend's brother and not much of a talker anyway. On my other side was Yumi's date, a 23-year old construction worker my mother had scared up for her at work. Looking at his plastic cup of punch in disgust, he suggested that I might like to go to the bar with him for a "real" drink. When that didn't work, he made idle conversation by recommending I enter a wet T-shirt contest.

This year, I'd guess that Calvin Klein Secret Obsession will be a popular choice for prom goers. Sarah Jessica Parker Lovely, Narciso Rodriguez For Her, and another Calvin Klein, Euphoria, will likely see some proms, too. I think Donna Karan Gold, Stella McCartney Stella, and Ralph Lauren Romance would be nice choices for a high school prom. Digging into the niche and classic categories, Christian Dior Diorissimo and L'Artisan Parfumeur La Chasse aux Papillions or Drôle de Rose would be fresh and romantic.

What perfume did you wear to your prom? Guys, any Guy Laroche Drakkar Noir? And for those of you with high schoolers at home, what fragrances are popular for this year's prom?