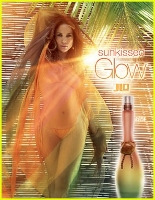 Sunkissed Glow is the latest flanker to J Lo's popular Glow fragrance, which launched in 2002 and was followed by Miami Glow, Love at First Glow and Glow After Dark. The summer-day-at-the-beach inspiration — "enjoy the feeling of warm sand on skin, bask in the glow of the hot summer sun" — recalls that of Miami Glow, and the juice itself is close enough that fans of Miami Glow are likely to enjoy the new version.

Perfumer Caroline Sabas developed Sunkissed Glow (she also did Miami Glow); and the notes are red grapefruit, pineapple juice, cassis sorbet, beach flower, orange blossom, water lily, passion flower, amber, hot sand, cashmere wood and skin musk. If Miami Glow smelled like a tropical suntan lotion laced with coconut oil, Sunkissed Glow, in the early stages, is perhaps closer to a cocktail garnished with lots of tropical fruit; as was the case with Miami Glow, it's a beachy fruity floral, sweet-ish, but considerably less so than much of the celebrity fragrance competition. No particular notes stand out other than the grapefruit and pineapple in the opening (and perhaps a bit of the cassis, for a time), and the florals in the heart notes are sheer and mostly nondescript. The dry down is warm and mild and musky, and recalls Miami Glow's "warm sand accord" — the longer the two are on skin, the more they smell alike.

Sunkissed Glow is nicely done, and gets a plus in my book for not smelling like candy (actually, just about all of the J Lo line gets a plus on that score — as a whole, the line is more "grown up" than most mainstream celebrity perfume brands). Still, despite the fact that I'm not usually a huge fan of coconut in perfume, I prefer the original Miami Glow. It was just more fun*. I understand it can still be found at some of the discount chains, so you might want to try both scents before you make up your mind.

Jennifer Lopez Sunkissed Glow by J Lo launches this month, and will be available in 30, 50 and 100 ml Eau de Toilette.

*I tried hard to think of a more precise way to put it, but "more fun" is all I came up with. Miami Glow was just kind of fun.