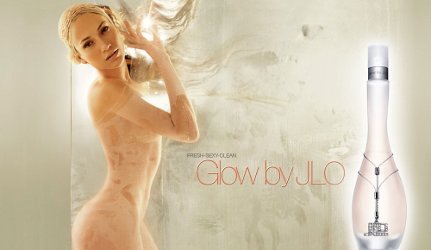 Jennifer Lopez released Glow, her first fragrance, in 2002, making her something of an old hand in the current celebrity fragrance boom. The fragrance was meant to target women in their late teens and early 20s, who presumably make up a large part of her fan base. Glow was a tremendous success, ringing up over $100 million in sales in its first year. No doubt it helped to attract other celebrities into the fragrance market, and J Lo herself has not been idle — she has just launched her fifth fragrance, Love At First Glow.

The original Glow was created by perfumer Louise Turner, and has notes of neroli, orange blossom, pink grapefruit, rose, sandalwood, amber, soft musk, jasmine, orris and vanilla. Jennifer Lopez was said to have wanted to capture the fragrance of freshly washed skin, and that pretty much tells the story of Glow: this is a very clean and very soapy floral musk. It starts with citrus and orange blossom; subtle floral notes are evident in the heart — the rose is soft, but noticeable — along with a tiny little tinge of powder, but the overall impression is of a scented guest soap. The musk notes are rather strong, and intensify the longer it is on skin.

As has often been the case with celebrity fragrances, I expected little, so was pleasantly surprised. It is very wearable, and has excellent lasting power. It is not particularly unusual, in fact, as has been noted elsewhere the dry down smells rather like the popular perfume oil China Rain, versions of which are available at Terranova or Body Time. Nor is it particularly sophisticated (for a more elegant take on guest soap, try Hermès Caleche). But you could do significantly worse with a celebrity fragrance, and for that matter, you could do significantly worse for the price.

Jennifer Lopez J Lo Glow is an Eau de Toilette. If you shop carefully online, you can find 50 ml bottles for around $25.