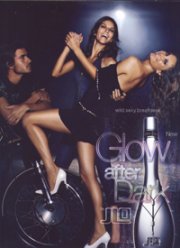 Glow After Dark is being advertised with the tag line "wild. sexy. breathless.", and as a late at night, out partying 'til dawn sort of perfume, rather like Britney Spears' Midnight Fantasy. Britney's fragrance, despite the sexy advertising, seems largely geared towards an audience that probably isn't allowed out that late, so I was curious to see what J Lo would do with the concept.

The requisite sweet fruits are there in the top notes, but not for long: this isn't the girly-fruity floral that was Love at First Glow, and it doesn't even begin to approach the sugar levels of Midnight Fantasy. The heart is that sheer blur of nondescript florals that characterize all the recent celebrity releases; the dry down is lots and lots of pale woody musk. The notes call it "pink musk", and that is exactly what it smells like. It soft and velvety-plush, more clean than not, and too bland to describe in any more detail than that.

It is marginally more sexy than Midnight Fantasy, I suppose, but only because it leaves out the grape Kool-Aid part. The truth is that if you put Midnight Fantasy on one arm, and Glow After Dark on another, after an hour you'll be hard pressed to remember which is which — they smell slightly different, but neither has enough personality to make it worth sorting out. After two hours, it might take a trained perfumer to correctly identify them from a line-up. Of the two fragrances, I like the Glow After Dark a bit better, but I'd much rather wear Glow, Miami Glow, or Live, any of which have more spunk and vitality than Glow After Dark.

Glow After Dark by J Lo is available in 30, 50 and 100 ml bottles of Eau de Toilette (with matching bling), or in Night Bright Body Lotion, Liquid Pearl Shower Gel and a Wearable Solid Perfume Pendant. Unlike Miami Glow and Love at First Glow, Glow After Dark will be an addition to the regular line (i.e., not a limited edition).

At the moment, you can request a free sample via the Jennifer Lopez Beauty website, and don't forget to vote for your favorite Glow Girl.