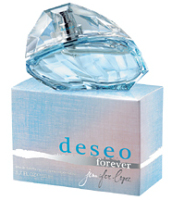 Inspired by a shower of petals in Jennifer's rain-kissed garden, Deseo Forever is a sparkling bouquet wrapped in lush femininity. A secret burst of summer peach, fresh freesia petals and orange blossom hidden with the hint of mineral notes and sheer musk.

In other Jennifer Lopez news, she is going to do a reality show:

Cameras will follow Lopez and her third husband, Latin singer Marc Anthony, as she launches a new fragrance and juggles her responsibilities as a first-time mother.

The 38-year-old star is billed as the co-creator and executive producer of the show, which will air on The Learning Channel. No launch date has been set.

I wish I'd had television cameras following me around when I was a new mother, don't you? (via telegraph.co.uk)

And a little bon mot from actor Ashton Kutcher:

If I can smell your perfume and we're not making out, you're wearing too much. More of a lot of things in life is better. Perfume does not apply.

Keep that in mind, ladies. (via sfgate)