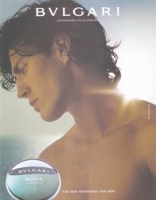 Bvlgari Aqva Pour Homme and Aqva Pour Homme Marine, both created by perfumer Jacques Cavallier, are classified as aromatic aquatic fragrances, “designed to evoke the natural freshness and vitality of the ocean.” We’ve all encountered fragrances or perfume notes that claim to capture the scents of clouds, sun, snow, mountain air, deserts, or beaches. I admit to being susceptible to such perfumes because my imagination can ‘fill in the blanks.’ If a perfumer presents me with “Snow” (or more likely, La Neige) — she can bottle some pine needle and cedar wood oils, incense/smoke notes, and a “cold, damp mineral” accord and I will create a snow scene in my mind (a snug cabin, or chalet, located in wintry mountains, its lopsided chimney releasing swirls of sweet wood smoke that creates a lavender-colored haze around snow-capped evergreen trees and boulders) that can accommodate her perfume idea. But that scene doesn’t really smell of actual snow (ice crystals) does it?

Imagine the perfume possibilities when trying to re-create the smell of water. Bvlgari has limited itself (somewhat) to re-creating the scent of the “ocean”/“sea” in its Aqva fragrances for men — and since I live in the Puget Sound region and grew up within sniffing distance of the Atlantic Ocean and the Chesapeake Bay, I feel ‘qualified‘ to judge its efforts. 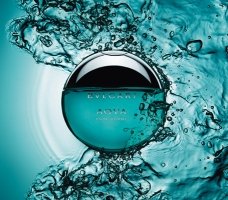 “My inspiration for Aqva Pour Homme came from deep water,” said Cavallier. To evoke the smell of the deep sea, he used notes of mandarin, petitgrain, santolina, posidonia, mineral amber and clary sage. I have a friend who loves all ozonic, marine, and ‘fresh’ scents, so last summer when I was given two large sample vials of Bvlgari Aqva Pour Homme, I gave him one of the samples and asked him to let me know what he thought of the fragrance. “It smells nasty,” he said. I made a note to try Aqva Pour Homme immediately; at least I knew it was not your run-of-the-mill ozonic/marine/fresh cologne (sorry, Friend, but we have talked of your perfume tastes face to face).

Aqva Pour Homme begins with strong mandarin and petitgrain aromas — a welcome change from the usual bergamot opening one gets in many mainstream men’s fragrances. Within minutes, the citrus notes fade away and an herbal aroma comes to the fore. Posidonia, an aquatic plant that grows profusely in Mediterranean and Australian waters, is a fragrance note in both Bvlgari Aqva perfumes. I’ve never smelled this fragrance note in isolation but I believe it accounts for a light, clean, slightly salty and “reedy” aroma in both Aqva scents. But posidonia cannot compete with Aqva Pour Homme’s pungent santolina note. To me, santolina leaves smell of petroleum; I always imagine a murky, dark green, molasses-like substance when I get a whiff of strong santolina, and I like the scent.

Aqva Pour Homme has an aquatic character, but it does not smell like ocean water. When I wear this fragrance, my imagination, once again, takes over and I’m at the shore where one smells damp, barnacled pilings and moorings; tarred wharves; seaweed; and warm oceanic breezes that are scented with the aromas of hot boat engines and their sweet-smelling exhaust fumes. In fact, the scent of Aqva Pour Homme reminds me of the Seattle Ferry Terminal! If you dislike the “gasoline,” or “dried tar” fragrance note in Christian Dior Fahrenheit, I wager you will NOT like Aqva Pour Homme. The santolina/posidonia accord starts off rather smoothly but quickly intensifies. At the very end of Aqva Pour Homme’s development I smell faint, dry/chalky amber. Aqva Pour Homme is a rather stark fragrance and it lasts on my skin for three hours or so (which is a good thing; I like the santolina/fuel oil note but don’t think I would want to smell it for much longer than three hours). 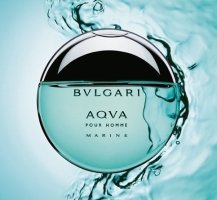 Aqva Pour Homme Marine contains notes of neroli bigarade, grapefruit, posidonia, sap, rosemary flower, and white cedar wood. A Bvlgari rep’s quote in Cosmetics International regarding Aqva Pour Homme Marine made me frown: It will definitely appeal to younger men and women, especially in Asia" (11/2/07). We all know what young men and women like: “fresh” and “clean” and rather “simple” fragrances (I’m generalizing, of course) and it is constantly mentioned in perfume news that many Asian perfume customers don’t like to smell of “perfume” at all — they appreciate fragrances that are barely noticeable.

My 2007 winner for blandest men’s fragrance release went to Kenzo Tokyo; so far in 2008 (the year IS young) Aqva Pour Homme Marine takes that prize.

Bvlgari Aqva Pour Homme and Aqva Pour Homme Marine come in 30, 50 and 100 ml Eau de Toilette sprays. (I hope you’ve all noticed that many new men’s fragrance releases are now available in a 30 ml size; this is great news for perfume “collectors”; now, if only U.S. retailers would stock the 30 ml size like their overseas counterparts do.)