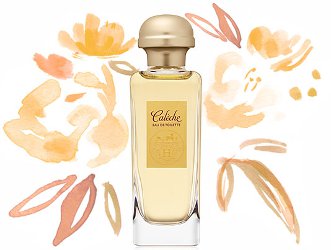 Some fragrances have a knack for separating the dabbler from the enthusiast. Hermès Calèche is one. If you sprayed a scent strip with Calèche and waved it in front of people at the bus stop, you’d probably get a lot of wrinkled noses, along with comments like “old lady” and “perfume-y,” even among people who like perfume and happily stock their bathroom shelves with Jo Malone and the latest Dior flanker. Calèche is hard to love.

Unless you’re dedicated to perfume, that is. Then, Calèche is Grace Kelly with a French count for a father, a mother whose linen never seems to wrinkle, and an aunt who’s a nun with a penchant for romance novels. The fragrance aficionado might never want to wear Calèche, but it’s irresistible to explore.

This review is based on two bottles of Calèche Eau de Toilette, dated 1980 and 1982, and Calèche Soie de Parfum — an Eau de Parfum formulation of Calèche — from 2000.

Calèche goes on with a blast of nose-tingling aldehydes and unsugared lemon, with background singers bellowing in other citrus notes. Seriously, Calèche is so lemony that if he smelled it, a trumpet player would have to open a window before continuing the concert. Guerlain Shalimar's lemon has nothing on it. Etro Shaal Nur approaches it. Plus, the aldehydes are powerful enough to feel like drinking champagne straight from a bottle that has just been shaken up.

Once the bubbles subside, mossy, incense-y wood rises to meet the citrus with just the barest whiff of a floral bridge. The Eau de Toilette feels greener with vetiver and manor-worthy lawn than the Soie de Parfum does. On reading Calèche’s notes, I’d hoped for a lush iris-spiked heart, but Calèche is bone dry, especially in Eau de Toilette. The result is fresh, aristocratic and unisex. The Duke and Duchess of Windsor might have shared a bottle between them.

And then — poof! — Calèche vanishes within a few hours of application. If I press my nose to my arm, I smell dry, dry cedar and the fusty remains of a gentle chypre. The Soie de Parfum lasts longer and has more assertive sillage, but just barely.

It took me a few years of wearing Calèche off and on before it started showing its character. On my very first wearing, Calèche smelled to me like a tart Chanel No. 5. Now, I recognize the two fragrances as distinctly different. No. 5 is sweeter, muskier, and more full of the garden. Madame Rochas smells more of spun sugar, blueberries and sandalwood (something I never would have written without testing it next to Calèche). Amouage Gold turns the aldehydic floral chypre volume up to eleven (thank you, This is Spinal Tap) with a full symphony, heavy on the strings, of warm florals.

After wearing the Eau de Toilette and Soie de Parfum again this week, I’m sorry I haven’t given Calèche the attention as it deserves. Maybe people down at the bus stop won’t get it when they pass through my Calèche-powered sillage, but I don’t care. Okay, I don’t have an ancestral family home in the French countryside, and I haven’t been on a horse since I was 8. But sometimes I like pretending.