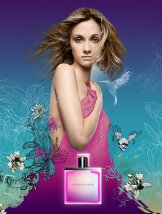 Matthew Williamson is the first global scent release from the UK designer of the same name. It follows Incense, which was created in conjunction with Lyn Harris of Miller Harris and released on a smaller scale as a limited edition in 2002. Incense was a big hit with perfume fans on the many fragrance forums, but it is sadly unobtainable now.

It starts with a strong and very sweet burst of citrus and tropical fruits over a heavy dose of something that smells like suntan oil mixed with jasmine. As the top notes start to fade, the sweetness is tempered somewhat by the cinnamon and ginger. The heart is a considerably softer, quieter blend of tropical florals, which eventually fade to a whisper, leaving behind a base of smooth sandalwood and resins. There is a touch of vanilla, but it is not particulary sweet in the final stages, and I found it very wearable at this point.

Matthew Williamson is very tropical beach-y, but to the extent that it is a an exotic beach, it is one that has already been overrun with tourists lathered with sunscreen. Tropical beach-y scents, especially very sweet ones, are not really my cup of tea anyway, so it is not something I am likely to wear, but it has its attractions and it will be interesting to see how it does on the open market, which strikes me as already crowded with beach get-away fragrances.

For those of you who loved Incense, of course, it is likely to be a massive disappointment. Williamson made it clear early on that he was looking for a fragrance that was more likely to find a wide audience:

My tastes aren't always commercially viable,' says Matthew Williamson with typical honesty about the difficult process of creating a new fragrance. 'I love exotic, woody, incense-based smells. But there's an overwhelming belief in this country that a white, clean, floral smell is where we're at. So I had to toe that line... to a certain extent.' (via The Independent Sunday, 5/15/05)

Here's hoping that he will follow this debut with something geared more directly to his own tastes.

Matthew Williamson is available now in the UK at Escentual and should be in the United States by next month.

Update 8/25/2006: the US launch of Matthew Williamson was postponed until September 2006, although as of now, it is already available in some stores, including Nordstrom. A sheer version of the scent is to launch later this year.