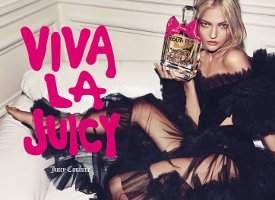 Somewhere along the line, I lost my taste for malls. Oh sure, I used to enjoy spending an afternoon perusing the shoes at Nordstrom, nipping into The Gap to see what was on sale, and sorting through the pastel lace-strewn bins at Victoria’s Secret. Ten years ago, a lot of my clothing came from department stores.

Then I changed careers, and my income dropped. At the same time, style began to interest me more than fashion. Suddenly, the clothing on Macy’s racks looked cheap and soulless. My curly hair, pale complexion, and midcentury curves would never jive with the streaky highlights and tight jeans that roamed the mall’s climate-controlled walkways. Seeing stacks of the same item on one table only dimmed its allure. Plus, the odor from Cinnabon turned my stomach. The mall and I called it quits.

To me, Juicy Couture Viva la Juicy and its spawn, Viva la Juicy La Fleur, are predictable and one dimensional. In short, they’re mall in a bottle. Yes, these fragrances are serviceable, but they require a minimum of effort to appreciate and present absolutely no surprises. Spend more than part of a day with them, and even Chick-fil-A starts to look exotic.

Viva la Juicy launched in 2008, and its notes include gardenia, honeysuckle, jasmine, caramel, praline, amber, vanilla, and sandalwood. To my nose, Viva la Juicy is sugar syrup, generic white flower medley, a sani-pak of purple juice, and a whole lot of musk. A hint of mandarin kicks it off, but within a minute you have Viva la Juicy’s core fragrance, and that’s what you’ll smell as long as the fragrance lasts. Which is for hours and hours.

I understand musk’s appeal. Just last night I craved some musk. It’s like cheesecake. Sometimes you want cheesecake, and nothing else will do. But after you’ve had a slice or two you’re done for a couple of months. When I get a hankering for musk, I dig around for my bottle of Coty Vanilla Musk or Jovan Musk for Women and satisfy the urge. Musk is easy to love, but it’s also easy to get bored — or even nauseated — with.

Viva la Juicy La Fleur was released this year. It opens with a sweet burst of peach and gardenia washed over with the juice from a can of mandarin orange pieces. Over the next hour, the peach melds into the sugary musk of Viva la Juicy. But the musk smells cleaner and so a little more like a hair product.

Viva la Juicy and Viva la Juicy La Fleur would suit a fourteen year old, and if a bottle fell into my hands I can imagine giving it to a friend’s daughter to real delight. Once the daughter started surfing street style blogs, though, her days with Viva la Juicy would be numbered. Maybe then I’d take her to a few of my favorite vintage clothing shops — and clue her in to the chic of men’s fragrances, the shimmering softness of iris plus jasmine, the woody retro kick of violet, and few other delicious alternatives to the homogeneity of the mall.