It is the second entry in the line from perfumer Celine Ellena, and includes notes of grapefruit, cardamom, Bourbon geranium, lovage, Haitian vetiver, patchouli, iris and ylang ylang. Inspirations for the fragrance are said to include the scent of salt drying on the skin after bathing in the sea. Many thanks to ParisLondres for the details.

Pure White Linen shares key elements with the original, which launched in 1978 — including aldehydes, rose and crisp green notes — but adds a hint of fruit...Pure White Linen opens with grapefruit, Italian mandarin, iced rose tea, raspberry, pear and apple notes; has a heart of red tulip, rose, wild honeysuckle, gardenia petals, jasmine and tuberose, and dries down to notes of white cedarwood, patchouli and white heliotrope. 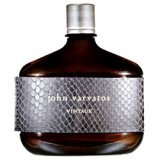 John Varvatos will launch Vintage, a seasonal variation on his first scent, in late summer. It is...

...described as having a "darker and [more] gentlemanly-like" feel than the first...Rodrigo Flores-Roux of Quest International blended Vintage, which is described as an aromatic chypre. It blends top notes of Moroccan coastal plants, rhubarb and quince paste; a heart of oakmoss, patchouli, balsam fir and floral notes, and a base of rare woods with tonka beans, tobacco and suede.

John Varvatos Vintage is an Eau de Toilette, and is available in 125 ml.

And Revlon will launch Flair this July as it attempts to reenter the prestige fragrance market. It was created by perfumer Annie Buzantian, and...

... is described as a modern chypre. Its top notes are of passion fruit and black currant; its heart is of peony, lily of the valley and ylang, and its drydown is of patchouli, plum and praline.

(the three above are via Women's Wear Daily)

Update: the launch of Flair was postponed until 2007 following serious financial difficulties at Revlon; we shall have to see if it ever appears. Update 2, 7/07: Revlon has finally launched Flair, but in mass market rather than prestige. Revlon Flair is being sold in 30, 50 and 100 ml Eau de Parfum, or in 15 ml Eau de Parfum Rollerball.

Givenchy will launch Amarige Mariage this coming October in an effort to attract younger consumers to the Amarige brand. The fragrance is "... a chypre oriental with notes of bergamot and jasmine and a cinnamon woody base." (via cosmeticnews) Update: read more about Givenchy Amarige Mariage here.

The debut fragrance is described as a delicate floral. The juice combines neroli, gardenia blossom, wild rose, water lily and jasmine. (via moodiereport)