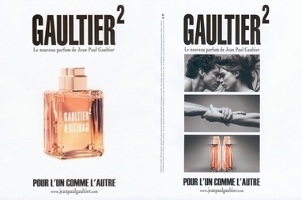 Gaultier2 was launched this year by Jean Paul Gaultier, the French fashion designer. It is the first unisex fragrance in the Gaultier line. It was created by perfumer Francis Kurkdjian of Quest International, and features notes of ambergris, musk and vanilla.

Gaultier had said that he did not want Gaultier2 to have traditional top, middle and base notes, and in fact it is an essentially linear fragrance. The start is amber, musk and vanilla, with a blast of something fruity-floral and very sweet. That 'something' has been compared both to bubblegum and to Classique, Jean Paul Gaultier's first fragrance. It has been some time since I have smelled Classique, but the bubblegum comparison is certainly apt.

The development is minimal, but the fruity-floral thing does calm a bit, the amber and musk get more intense, and the vanilla takes on a creamy, pudding-like character. It is very smooth, with a velvety, almost-powder finish. It also stays very sweet. I would guess that its official fragrance family classification is oriental, but under my own idiosyncratic system, it gets placed squarely in the cozy-comfort scent category.

It is not your traditional unisex fragrance, but then, Jean Paul Gaultier did not want that either:

The perfume is about the idea of sharing. It is not unisex. It is a fragrance for couples, a togetherness perfume. (Women's Wear Daily, 7/22/05)

To drive home the point, the bottles (which come in 20, 40 and 120 ml) are magnetized so that they can cling to each other and be snapped apart as needed. 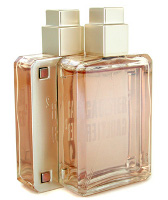 All of this harkens back to the pre-modern era (in fragrance, that is), before the idea took hold that certain smells were masculine and others were feminine. It will be interesting to see if that strategy can work today. If you are a man who demands a modicum of overt masculinity in your fragrance, you may have trouble with Gaultier2; by modern standards, it leans more obviously towards the feminine.

If you are not such a man, then of course, you have the whole of the women's perfume counter at your disposal, and you could just as easily wear Youth Dew Amber Nude. I am wearing both fragrances now, and see no difference between them on the gender identication scale. But then, I am used to shopping both sides of the aisle anyway. One benefit is that it is much easier for me to get samples from the men's counter: I just say I want to take them home for my husband to try.

Gaultier2 is an Eau de Parfum, and the lasting power is very good. The line also includes a 100 ml massage oil. It does not launch in the United States until next year, but imaginationperfumery has it in stock now.