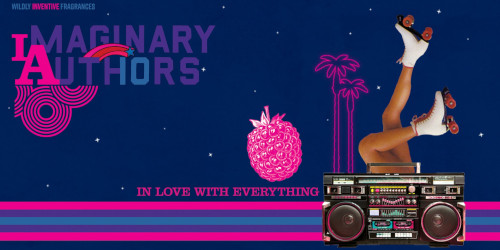 Written in 1982, this electrifying novel about sex, drugs, and decadence in pre-Miami Vice Florida follows a delinquent clique of teenage girls through nightclubs, roller discos, and seedy South Beach bars in search of anything to keep the party going.

That's the "inspiration" behind In Love With Everything, the latest fragrance from indie brand Imaginary Authors. Like the other scents in the line, of course, it refers to an imaginary book by an imaginary author. This description of an "unflinchingly honest portrayal of strong, outspoken, resourceful young women whose sole motivation was to have a good time" evokes a female-centered version of Less Than Zero, ripe for a film adaptation directed by Sofia Coppola. Conversely, if there had been a literary source for the movie Foxes, it probably would have sounded a lot like this.

So, how has perfumer Josh Meyer scented this glittery coming-of-age trip? In Love With Everything's listed notes include raspberry, citrus pulp, coconut palm sugar, Madame Isaac Pereire (a variety of rose with a scent like raspberries), sandalwood, tropical punch and stardust. ("Stardust" is an old nickname for cocaine, incidentally.) This is a fruity gourmand that doesn't hold back on the sugar, an olfactory meal of nothing but dessert courses: a cherry-topped piña colada, followed by coconut sorbet garnished with raspberries and a squirt of rose syrup, followed by a dish of whipped cream over a few canned mandarin orange slices.

I've seen some online comments lamenting the sweetness of In Love With Everything, which is a departure from some of the line's earthier fragrances, but that's exactly the point. This is an over-the-top homage to an over-the-top era in style and pop culture. And, in our own moment, when woody and oud-y fragrances or barely-there skin musks have gained in popularity, In Love with Everything is a delightful throwback to the unabashed fruitiness of The Body Shop's Ananya or Bath and Body Works's Sun-Ripened Raspberry, Coconut Lime Verbena, et al. — more 1990s than 1980s, just to be pedantic, but still a fun revival that feels in sync with the "neon floral" of Gallivant Los Angeles or the fabulously fake raspberry of Thierry Mugler Angel Nova (not to mention the current popularity of the 1980s-set TV show Stranger Things). Unlike many other scents from Imaginary Authors, In Love With Everything doesn't have a darker side. (Unless, that is, the name is pulled from Depeche Mode's "Blasphemous Rumors" from 1984, which would forecast a grim outcome for some of these imaginary girls.) 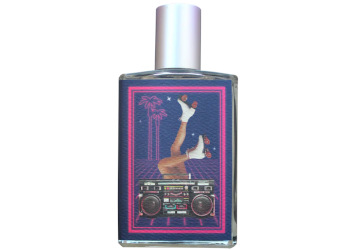 Here and now, though, In Love With Everything is a fun ride, from its radiant fruit-punch opening to its vanillic, skin-scent dry down. I'm imagining it wafting in a cloud around the imaginary novel's pack of girls, who must also be wearing tight designer jeans with colorful halter-tops and an abundance of hairspray and shimmery eye shadow. Personally, I'm pairing this fragrance with pink lipstick and tuning in to the period-appropriate In Love With Everything playlist on Spotify, with tracks from post-punk and New Wave bands like Blondie, The Go-Gos, Bow Wow Wow and The B-52s. I'll see you over there.