Considered by the Chinese as one of the three holy fruits with peach and lemon, the grapefruit was a symbol of prosperity and fertility. Also highly prized by the Greeks and the Romans, the hesperide has a crisp freshness: known for its rich terroir and unique soil, the Salta region enhances the citrus’ intensity. Blended with verbena and hyacinth, the grapefruit fragrance is aromatic. ~ Cire Trudon

CITRUS LESSON: As regards China, I think Cire Trudon is confusing grapefruit (C. paradisi) with either citron (C. medica) or pomelo (C. maxima). Pomelo and Buddha's hand citron (a variety of C. medica) have symbolic meaning in Chinese culture. Grapefruit? No. The grapefruit originated in the 18th century — in the Caribbean region; it's a cross between the pomelo and the sweet orange (C. sinensis) — and sweet orange is a hybrid itself, between pomelo and mandarin (C. reticulata).

"No matter the muddled blurb, the Salta candle is superb" (I admit, lines as bad as Cire Trudon's!)

Robin posted her daily lemming devoted to Cire Trudon's Salta candle back in March of 2019. Grapefruit? A blue jar? She and I were both 'smitten' and chomping at the bit...and wanted the other to buy Salta first before forking over $115 ourselves. I kept waiting for my local Barneys New York to stock Salta so I could sniff before buying, but Barneys went out of business before that happened. So, I just up and told my partner to get Salta for me at Christmas; after all, I've never been disappointed with a Cire Trudon candle.

Robin: this review is dedicated to you; as I suspected, you possessed the spine of steel, not me. 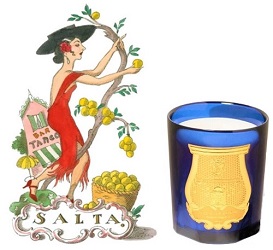 Salta is part of Cire Trudon's Les Belles Matierès series (I've also owned and reviewed Tadine). Salta is easy to review: just imagine handfuls of all sorts of pungent/oily citrus peels placed in a mortar and pounded. The lively scent produces euphoria. As I smelled the Salta wax (cold, when burning, even rubbed into my skin) I imagined all sorts of citrus: grapefruit, tangerine, citron, even kumquat. This is citrus variety C. x 1000: outrageously powerful in scent. If any of you are asking why I'd pay $115 for a citrus candle, all I can say is Salta's like smelling the real thing (on steroids), without a hint of chemical/synthetic aromas. It's a citrus-lover's dream. Though there's a light citrus floral in the background, I don't detect hyacinth or verbena in the mix...and that doesn't disappoint me. The hyacinth element was what "scared" me all those months as I kept hoping Robin would buy Salta first. (Hyacinth can smell cheap in fragranced products and have a weird jagged/fusty vibe.)

If you have a favorite grapefruit (or other citrus) candle, please share the info with us!

Salta burns cleanly and its scent intensity fragrances a big area. For the mood it produces in me, Salta's $115 price is a bargain.

Now, if I could only figure out why Cire Trudon named this candle after Argentina!