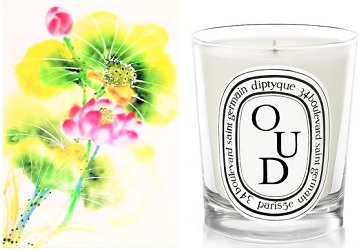 I burn scented candles in summer. Beautiful aromas make me feel "cooler" / calmer if the air is hot, and if the AC is on, scented candles freshen the air.  I used to think light floral or citrus-heavy candle scents were best for sultry days, but now I tend towards "tropical wood" scents in summer (and reserve my floral and lemon/mandarin/grapefruit candles for winter). Today I'm reviewing two candles with "exotic" aromas: one presents oud and conjures a Southeast Asia temple, the other showcases sandalwood and makes me want to travel — to Karnataka or Australia.

The Diptyque Oud candle is described as a "companion" to Diptyque's Oud Palao perfume. Since both are powerhouses, I'd imagine wearing Oud Palao while burning Oud would induce fainting. (I keep the experiences separate.) Though there is a similarity between the candle and perfume (especially during the perfume's base phase of development), the Oud candle has its own personality: it's less ornate, not as "shiny" — it's meditative. Oud has a woody muskiness about it, some singed leather and sweet agarwood incense smoke and ash. I've enjoyed burning this candle since Christmas when I gave it to myself as a little present. I'll continue to burn Oud during summer; to smell it mixing with the scents from my garden will be a treat (and burning an oud candle is easier and less messy than dealing with incense). At my last job, there was a Vietnamese Buddhist temple across the street; Oud reminds me of the lovely scents emanating from the black iron disk in front of the temple door, always full of bright red and gold joss sticks in constant burn mode. 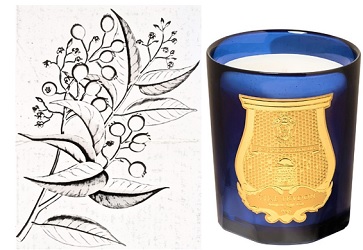 Tadine is the principal town of Maré Island in the Loyalty Archipelago, New Caledonia. Its steep coast shelters one of the best sandalwood reserves of the island. Between maritime pines and translucent waters, marine fragrances/scents blend with sandalwood’s elegance, at the heart of island legends.

Book me a cabin on the next ship out!

The scent of sandalwood always makes me think of heat: imagined heat of the places it grows and the warm smell of the material itself. I love summer colognes spiked with something woody: be it vetiver, cypress or sandalwood. Tadine made me happy (and nostalgic) from the first time I lit it. Tadine supplies lots of sandalwood aroma, and the combination of "young" / vibrant sandalwood and intense green cardamom made me think of my grandmother's antique hurricane lamp (filled with pungent kerosene) that I would make her light and put on the porch when we'd sit outside in summer near dusk and watch the fireflies and dragonflies flit about the tiny meadow next to her house. The neighbors' sheep would amble to the boxwood hedge and let my grandmother kiss the tops of their heads and rub their faces. Though I'm filled with delight at that scent memory, I wanted to point out the potency of Tadine's sandalwood and cardamom — they smell like luxurious "fuel."

Diptyqe Oud has amazing throw and intensity; I've given up my boycott of Diptyque candles because their scents are so fantastic. I just accept I'll have to tweak those candles constantly to keep the wax even and have a complete burn/use of the candles. As Cire Trudon Tadine burns, its scent seems to travel in a single cloud: it might settle in the hall, a bedroom or the living room. When I extinguish the candle, I smell the aroma over a wide area for many hours. I keep my Tadine candle in a bedroom and burn it (behind closed door) as I read, write or nap with a cat. Cire Trudon wax is wonderful and requires no "work" on the part of the candle owner. Both candles burn cleanly if you keep the wicks trimmed. Below, I've included a candle tip sheet from an old post of mine for those new to candle-burning.

When you burn your candle, make sure the entire top of the candle turns to liquid. If you are the type who lights your candles, lets them burn a few minutes to release fragrance, then blows them out: you will get an "ugly" (and wasteful) burn. An ugly burn is when your candle forms a "core"...with lots of wasted wax build-up along the sides of the glass — your wick will burn away before the precious, scented wax does. Due to the hard-wax blends used, quite a few expensive brands have this "core" tendency even if you allow the candles to burn for hours (I'm looking at YOU, Diptyque). Keep your candles away from drafts; a strong draft will affect the liquefying pattern of the wax. If you notice that the candle wax liquefies unevenly, reposition the wick to the center after allowing the candle to burn at least 30 minutes.

Trim the wick to 1/4 inch before each burn (this makes the candle burn at a slower rate and cuts down on candle smoke and flickering flames).

Finally, cover your candles with a lid when not in use to prevent the tops from attracting airborne detritus like dust, pet hair, and the like.