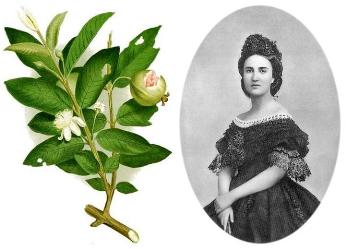 Ah, inspiration! Cire Trudon, in collaboration with Arquiste, created the Mérida* candle to memorialize "...a balmy night described by Empress Carlota of Mexico on her visit to the city of Mérida, Yucatán, in 1865." Empress Carlota (also known as Charlotte of Belgium) arrived in Mexico as an invader (though we must cast more blame in the direction of her hubby, Archduke Maximilian of Austria/Emperor Maximilian I, and Napoleon III — the instigator of the French invasion of Mexico in 1861 and the one with the daft idea to install Europeans, Carlota and Max, on the "throne" of Mexico. More history later; first, the Mérida candle.

Mérida is an homage to guava. Once a year, I make a large batch of guava jelly for a friend's birthday present; to her, guava jelly evokes her childhood in India. (She puts guava jelly on buttered toast and tops it with cream.) While I cook the guava fruit for the jelly, I'm amazed at the guavas' intense aromas: tropical, sweet, musky and floral. Cire Trudon/Arquiste did an excellent job in the recreation of guava scent. As the Mérida candle burns I smell ripe/pungent guava fruit, a slightly powdery white floral accord, and, for a time, a green note that makes the candle smell more savory than sweet. If you pay close attention and let the candle burn for a good while, you may detect a hot metallic powder/incense note (the gunpowder/fireworks accord). The wood notes in Mérida are mild and let the fruit and flowers dominate. I think Mérida would make an excellent addition to Arquiste's perfume line-up. Mérida is a year-round candle: perfect for hot summer and even better in winter when you yearn for warm weather and fresh fruit. 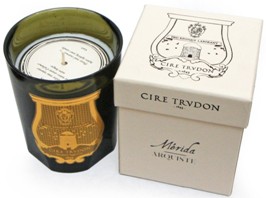 Carlota arrived in Mexico in 1864 and enjoyed two "good" years as empress before things got ugly. In 1866, as Benito Juárez fought to regain power and as the French army abandoned her and her husband, Carlota fled to Europe to beg Napoleon III and Pope Pius IX for help (she was ignored). It was in Europe, in 1867, that she got word that her beloved husband had been executed by firing squad — that incident gives a strange (intentional? unintentional?) twist to Mérida's "gunpowder" note. Carlota suffered a mental breakdown and was declared insane (women were always being declared insane, weren't they; perhaps Carlota suffered from unrelenting depression and sadness — having a loved one killed by firing squad can do that). Carlota never talked about Maximilian's death even though she outlived him by 60 years; she died, age 86, in 1927. Carlota did love the exotic scents, tastes and sights of Mexico...and she's not the first doomed queen to inspire perfumers, though she'll never outdo the empress of scent in that regard: Marie Antoinette.

Note: top images of guava branch and Charlotte of Belgium via Wikimedia Commons.