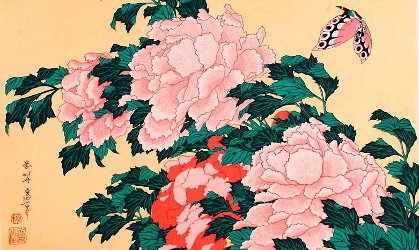 Just imagine: enchanting peonies, transformed into invisible irezumi to beautify the skin and its surroundings.

This is the introductory line in the press release for Geisha Botan, the newest fragrance from independent perfume house Aroma M.1 This scent is an homage to the peony ("botan" in Japanese) and its cultural significance in Japan and China, where the peony is an auspicious motif and has appeared for centuries in art forms from porcelain and tapestry to printmaking and, yes, traditional tattoos.

The mention of irezumi (tattoos) and these other visual arts is telling, because Botan is much more an artistic interpretation of the peony's color and texture than a literal recreation of its scent. I think of this flower as having a fresh yet soft fragrance that's slightly rosy, slightly fruity, with the faintest hint of black pepper. I quite liked Stella McCartney Stella Peony when I recently tried it, because it matched my recollections of sniffing a peony bush. Aroma M takes a different approach, giving us a sweeter, velvety take on peonies' blush hues and curved, ruffled petals.

The listed notes for Geisha Botan include peony, rose, sandalwood, vanilla, velvet woods, forest lichen, oakmoss and musk; as you can see, this isn't a soliflore. The peony note is delicate and the rose is a little deeper, but they're not alone: Botan is what I like to call a "fleurmand," a floral-gourmand that evokes some fantastic flowery dessert. Yes, it has notes of creamy sandalwood and skin musk, but most of all, it has lots of vanilla. Botan's vanilla reminds me of the way the air smells when you walk into an old-fashioned ice cream parlor; it's mouth-watering, but not too heavy.

This vanilla core also makes Botan feel like a sibling to 2016's Vanilla Hinoki. However, Botan's floral notes make it feel more "feminine" than Vanilla Hinoki, whose accents of spice and green wood register as gender-neutral. If, as I wrote earlier, Vanilla Hinoki is a "soft, lightweight robe that you'd wear just before stepping into one of those Japanese heated spa springs," then Botan is a pink felted-wool sweater with a soft texture and a boxy cut.

Geisha Botan is available in two formulations; I'm noticing a boozier vanilla effect in the oil, while the florals are more evident in the Eau de Parfum, but both have excellent staying power and both have brought me compliments. Overall, Geisha Botan is another fragrance in keeping with Aroma M's East-meets-West, classical-meets-modern aesthetic and it should appeal to lovers of sweet florals who want to envelop themselves in a sophisticated comfort scent.

(Not to mention that I'm still thinking of that description of Geisha Botan as "invisible irezumi" — for the record, I don't have any real tattoos, but thanks to perfume, I can flaunt a new olfactory "tattoo" every day.)

Note: top image is detail from Peonies and blossom by Katsushika Hokusai via Wikimedia Commons.

1. For full disclosure: Maria McElroy (of Aroma M) and I first met years ago when she was showing her line at a shop in New York. I liked her work, so I kept showing up at her store events, then at her studio events. We've come to know each other through ongoing contact in New York's tight-knit circle of perfume-lovers. As usual, however, I wouldn't bother to review this fragrance if it didn't truly appeal to me and/or give me something to think about.