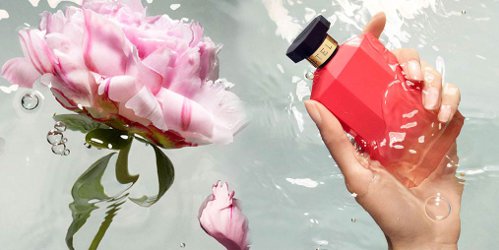 I've been a fan of Stella McCartney's Stella since it was launched in 2003, so I'm not sure how I missed the Stella In Two fragrance duo that was released as a flanker set in 2006. (Was it really that long ago? Yes.) The peony half of Stella In Two was reformulated and relaunched as Stella Peony in late 2017, so I thought I should catch it this time around. I've loved peonies since I was a child and spent time examining the peony bushes in my grandparents' backyard. Peony flowers have become something of a cliché in recent years ("basic," as the kids say), but I'm still partial to the idea of a peony-inspired perfume.

Stella Peony was developed by perfumer Alberto Morillas and includes notes of mandarin, freesia, lotus flower, peony, geranium, amber and patchouli. (Jacques Cavallier was credited with the original In Two duo.) The card for my sample describes it as "a daring blend of peppery florals and amber gris." To my surprise, that description is pretty accurate. Many peony perfumes are actually light, rose fragrances with lemony top notes, very pretty and pink but still somewhat disappointing. Stella Peony is unexpectedly androgynous in its earlier stages, with plenty of pepper and a surprise note of something like anise.

Stella Peony's heart is more floral, although the pepperiness lingers and things never turn "girly." There's a soft rose note, with the subtlest hint of citrus. The dry down has a mellow woody-musky feeling, with a hint of saltiness on the skin. This must be the effect of the ambergris — which, as the Stella McCartney website reassures us, is "derived from an innovative and environmentally friendly substitute for ambergris, a substance produced by the sperm whale." Stella Peony's staying power is average for an Eau de Toilette. I wish it lasted longer on my skin, because it's been an enjoyable scent-companion for these early spring days.

If you ever tried the peony half of Stella In Two and you've sampled Stella Peony, how do you think they compare? I'm curious! 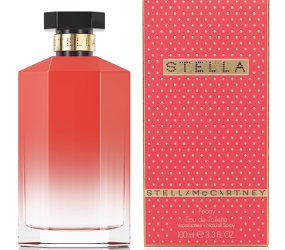