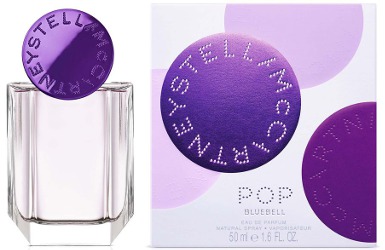 Stella McCartney has launched Pop Bluebell, a new fragrance for women. Pop Bluebell is a flanker to 2016's Pop.

Feminine without being fragile, bold yet balanced, POP Bluebell makes a statement without ever having to shout.

POP Bluebell tempers the bright and dewy bloom of the English bluebell with a deep and intriguingly warm sandalwood base. Known for its delicate yet distinctive scent, English bluebell brings a new balance, depth and personality to the original POP scent, echoing the multifaceted nature of the now evolved new generation of Stella McCartney icons.

The English bluebell is an endangered species and it is illegal to pick it, so POP Bluebell uses biomimicry out of respect to this precious flower. Biomimicry means that the flower’s distinctive scent can be captured without any damage to the plant, or to its existence in its natural state. This is the first time headspace technology has been used on this remarkable species, and it also makes POP Bluebell the first perfume to capture the flower’s actual scent, rather than an interpretation.