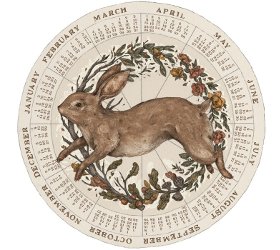 I'm starting the year off in Guerlain Cologne du 68.

Oops...and I meant to remind everyone that Donatella will be dropping by tomorrow to clear out last year's damage so we can all start 2018 with a clean slate!

Reminder: on 1/5, we're doing Color My World...wear a perfume with a color in its name. If you don't have one, tell us what color you think matches your perfume. Suggested by Pyramus.

Note: the 2018 Rabbit Circular Calendar is "Printed to order on premium, thick matte paper by a museum quality printer", featuring an "Archival giclee print of a rabbit surrounded by a wreath representing the four seasons, illustrated by Jessica Roux." 12 x 12, $30 from Jessica Roux.