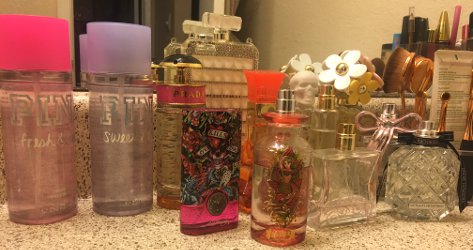 Christy doesn’t know the name of the perfumer who developed her favorite fragrance, and she’s not geeky about notes and structure. She’s heard Chanel No. 5 is nice, but it’s never crossed her path. At the same time, she loves perfume and makeup, and she’s loaded with style. I couldn’t wait to talk with her about her perfume collection.

When I caught up with Christy, it was late Sunday night, and she was ironing school uniforms for her daughters. Christy is a single mom in Georgia with three girls between the ages of two and nine, plus a full-time job. Not surprisingly, she lives on a budget. She’s more likely to buy perfume at the mall than toss down her credit card for the latest $400 niche bottle.

Christy says there wasn’t a lot of perfume in her life before high school. Her mother had allergies, and Christy was the only girl of four kids — in fact, the only girl among seven or eight cousins — so no sisterly bottles to sample. Her first bottle of perfume cost two dollars, and she picked it up while waiting in line at Walmart. It was an Impulse brand — you know, the “if you like that, you’ll like this” type — called “Midnight Something,” Christy says. “Fortunately, my taste moved on.”

Today, she has about 12 bottles of perfume, and her favorite fragrance is Lace, a perfume from the Charming Charlie boutique’s house line she bought at Peachtree Corners. Christy describes it as “summery, soft” and “like a bottle of wine in a perfume bottle.” She also loves the Ed Hardy line, and has all but two from the line. “I would probably die if I could meet him.” She likes the extremes of the packaging — Villain has a mermaid etched on the bottle — and they smell “amazing.” Love Kills Slowly is one of her favorites. 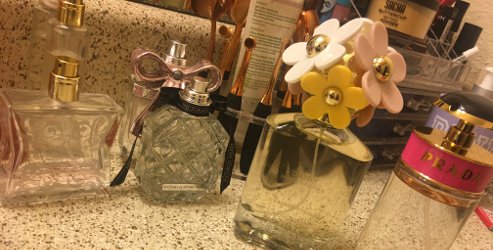 The Victoria’s Secret Pink line makes up a good portion of her fragrance collection, too, including Sweet & Flirty, Fresh & Clean (with glitter), and Sweet & Fluffy which her two-year-old girl loves. Which brings us to another reason she wears fragrance. “The girls watch me get ready for work. I want them to take pride in how they dress and put themselves together.” She lets them spritz themselves lightly with perfume on Wednesdays, which is Professional Day at the school her two oldest daughters attend.

Christy’s favorite season is winter, around Christmas, when she can snuggle up at home with a blanket and read (reading is something else she likes her daughters to see her doing), so it’s not surprising that her dream perfume would be based on a warm sandalwood and vanilla “with a hint of lemon, like a lemon drop.” Her favorites smells in general include vanilla extract and cinnamon.

One of the things she values most about fragrance is that “it doesn’t have a particular demographic.” You can be any gender or age, rich or poor, or any race or ethnicity and wear the same fragrance. "It’s something we share," she says, something that unites us. I couldn’t agree more.