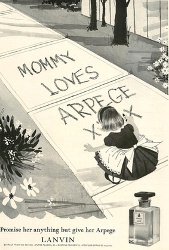 When I talk to people about their history with fragrance, they almost always mention their mother’s perfume. The person’s gender doesn’t matter, either.

Sometimes the mother's perfume stands as a point of contrast. For instance, in last week’s post Erin mentioned her mother’s love of heavy orientals, while she likes fresh and green florals and chypres. I didn’t get the impression she specifically intended to call out the difference between their tastes, or that it matters to her, but it does show how we might define ourselves in part by how we’re different from our mothers.

Sometimes talking about a mother’s perfume is a way to luxuriate in a memory — or call one forth. I couldn’t wait to smell the Prism Parfums reissue of Revlon Moondrops because my grandmother wore it, and I miss her. (Really, though, the taste of bread and butter pickles reminds me more of her.) A few years ago, someone read my review of Lucien Lelong Indiscret and contacted me because she was eager to smell it to see if it would help recall her long-dead mother. (She later reported that it didn’t smell familiar, but her mother may not have worn it often enough.)

My mom ran through bottles of Cachet, Jontue and Toujours Moi, and briefly flirted with a bottle of Jovan Frankincense and Myrrh (anyone remember that one?). As a girl, I saw Lanvin My Sin near her sink and I remember hearing her talk about Charles of the Ritz, but I bet it would be the Jontue I’d remember best, since she wore it with a liberal enough hand to come home one day in the 1970s complaining that her boss had asked her to tone it down. Probably the biggest role my mother’s perfume played was to set the example that perfume was something to be enjoyed.

But, what about the perfumista? We’re fragrance magpies. We’re probably not destined to be remembered for one particular scent. For those of you with children, maybe you’ll be remembered for your passion for perfume and for an ever-changing carousel of good smells instead of a single fragrance. That’s not so bad, either.

How did your mother’s fragrance influence your love of perfume?

Perfume: on smelling your age
Perfume and Memory
Profile of a Perfumista: Diane