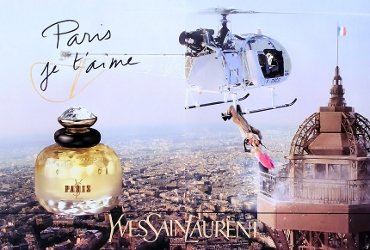 Are certain perfumes better for people of certain ages? Short answer: no. Aside from toddlers smelling like they’ve emerged from a bordello (and I believe Pampers has avoided this faux pas so far), no.

That said, some fragrances definitely ring the bell of a particular time in life, and it pays to be aware of the vibe your fragrance puts out. Since trends have buffeted perfume just as they have hairstyles and hemlines, women who hit their stride during a certain era might still cling to a scent that was fashionable then, even if they’re otherwise up to date on style.

For instance, aquatic fragrances were all the rage in the early 1990s. Women who still wear Issey Miyake Eau d’Issey smell squarely middle-aged to me. A waft of Yves Saint Laurent Paris is a tip-off, too, that its wearer came of age in the late 1980s, early 1990s (I know Paris launched in 1983, but am I wrong to think it became more popular later?). Estée Lauder Youth Dew, so popular in the 1950s, says “I get the honored citizen discount.” Chanel Coco Mademoiselle is the mark of a woman at the age when she’s stopped getting all her furniture at Ikea and is getting ready to buy her own condo.

Then, of course, certain notes don’t so much tie to an era, but seem to read as a particular time in life. Powder equals youth — or extreme age. Lily of the valley and orange flower feel young. Gardenia and tuberose smell lush and more experienced. Sharply aldehydic florals hover in the “mother” stage of the classic “maid, mother, and crone.” On a man, tobacco smells older. But, really, does any of this matter?

One of my coworkers has a tee shirt that reads “Authenticity is always in style.” That saying applies to perfume, too. Be true to yourself. If you love Youth Dew, and you’re 15 years old, run with it. (Look at what dressing as a senior citizen did for the Style Rookie.) If you’re a full-grown adult who masterminds corporate takeovers for a living, but you adore girly girl, pre-teen types of perfumes, then wear your Love’s Baby Soft proudly (or upgrade it to Lorenzo Villoresi Teint de Neige — heck, you have the money) and keep them guessing. If my perfume were an accurate indicator of my age, I'd be pushing 90 years old. In fact, I've been 29 for several years now.

What do you think? Do particular perfumes remind you of certain ages? Do you wear fragrances that might be considered favorites of people of another generation than yours?