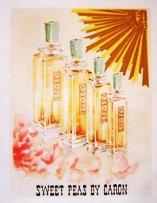 You might know Diane as "Dragonfly00" on MakeupAlley, or as the owner of Dragonfly Scent Me, an ebay store selling perfume samples and decants. Either way, if you know of her at all, you know her as a real perfumista — or, as she calls it, "perfume junkie". She's a native New Yorker and former therapist now living in Georgia, and she laughs easily as she talks. Here is a little more about her:

Getting Started. Diane played around with perfumed oils in college, but she credits hormones with kickstarting her serious interest in perfume about four years ago. She'd just had a baby, and when she stopped breast feeding she was struck with a sudden and strong urge to find a scent of her own. She pushed away her bottles of Molyneux Quartz, Mariel Hemingway H20, and Ferre, and started investigating perfume in department stores and on the web. She stumbled onto MakeupAlley and then started swapping and buying samples in earnest.

Vintage Fragrances. Diane is a self-described "vintage freak". She loves old perfumes because of their history, and because their florals aren’t "screechy" but are blended and subtle. She says that Caron was the gateway to her love of vintage scents. She started with En Avion, French Can Can, Poivre, and Nuit de Noel, which she calls "essentially vintage scents that are still made today". Then she bought an old bottle of Narcisse Noir on the internet and opened it to find almost inky-black juice and the richest, most delicious incense scent she could imagine. She took the bottle to the Caron store in Manhattan to compare it to new Narcisse Noir and was surprised to find how different they were. Diane says that some vintage scents age beautifully, and like wine their aroma can become more lush and deep with time. Plus, she says, she enjoys the chase.

Family History. When her grandmother died, Diane found piles of fragrance samples and minis at her house. In fact, the police, who came since the grandmother died at home, asked if her grandmother was in the perfume business. Diane speculates that her grandmother may have been a compulsive collector since despite being a teetotaler she also had stacks of mini liquor bottles. Diane wonders how much of her own perfume mania is love of scent and how much is the desire to collect.

Dragonfly Scent Me. Diane wanted to work from home, where she could be with her young son and disabled husband. She had sold baby clothes and other things on ebay, and realized that certain brands of perfume seemed to be selling well online, too. So she started selling Clean and Child, even though she detested the scents to the point of getting hives from decanting them. Before long, she branched out to sell niche and vintage scents.

Most Popular, Least Appreciated, and Favorite Scents. Caron Tabac Blond and Serge Lutens Musc Koublai Khan and Fumerie Turque are among the most often requested samples at her store these days. Diane says that Caron Pois de Senteur, a floral that is "amber-y and comforting, sweet but not sickly sweet" deserves to be more popular, and Cherigan Fleurs de Tabac is a gorgeous but relatively unknown vintage scent. As for her own favorites, Diane refuses to be pinned down. She said that a friend once asked her what her favorite perfume was, and she sent a list of her "hundred signature scents". But, if you specify a note, she does have a few favorites. Among iris scents, she likes Divine L’Homme de Coeur, Serge Lutens Iris Silver Mist, and The Different Company Bois d’Iris. For incense, she likes old Narcisse Noir, Creed Angélique Encens, Lorenzo Villoresi Incensi, Donna Karan Chaos, and Houbigant Idéal.

What’s Next. Diane is developing an interest in perfume bottles and is starting to stalk particular bottles online. She’s also written a post on factices for Perfume Posse and would like to write about aouds, one of her newest loves. In the meantime, she’s keeping an eye out for that rare Guerlain or magically affordable bottle of Weil Zibéline Secret de Venus.