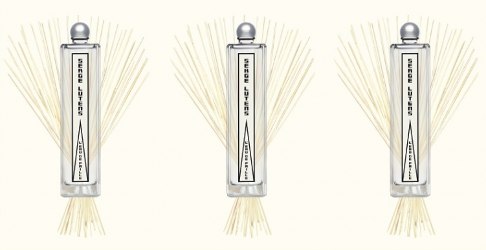 L'Eau de Paille (straw water) is the latest in the L'Eau series from French niche house Serge Lutens. A quick recap of my reaction to the first three is probably in order — if you have found the brand's foray into "anti-perfume" enchanting, you should probably stop reading right about now.

L’Eau Serge Lutens (2010): reasonably nicely done if you want a clean "anti-perfume". Which I don't. If I did, they're already thick on the ground, and I could surely find one much cheaper than this. But whatever.

L’Eau Froide (2012): also reasonably nicely done, but teeters dangerously close to what I think of as "generic department store man smell, sportified". Still, Froide is my favorite of the pack, so far. That said, I wouldn't buy it, not even if I found it on the markdown shelf at TJ Maxx.

Laine de Verre (2014): "as though Serge Lutens decided to take (relatively) recent consumer preferences for clean, and push the envelope as far as it could be possibly pushed with modern chemistry". I feel a little sick to my stomach just thinking about it. If I ever smell it again, it certainly won't be on purpose.

So why am I even trying L'Eau de Paille? Well, it's Serge Lutens, and old habits die hard. Plus, the name and the visuals drew me in: I love hay notes. A nice dry hay (this one was advertised as "a dry eau, for those who don’t like to get wet") would presumably suit me just fine.

Wearing L'Eau de Paille was therefore not a happy surprise — there are vague bits of the promised vetiver, incense and grains, but mostly what we have here is more generic department store man smell, this time of the fougère variety. It's flat, sweet-ish and fresh; the most prominent notes to my nose are probably vetiver and tonka bean. I hate to accuse a fragrance of smelling synthetic, because there are perfectly marvelous fragrances that smell entirely synthetic, but this smells synthetic in a not-marvelous way, as though they'd taken a bargain-basement modern masculine fougère, and watered it down a bit, and then added another dollop of vetiver and tonka bean. It doesn't smell like hay or straw, and it's not really all that dry.

L'Eau de Paille is the most conventionally masculine of the four in the series. The lasting power is good.

Verdict: Yawn. L'Eau de Paille does not smell unpleasant, so I guess you could say I like it better than Laine de Verre, but of all the series, it strikes me as the least interesting. In a million years I don't think anybody who smelled it blind would recognize it as a niche product at all, much less a Serge Lutens.

As always, if you've tried it, do chime in, whether you loved it or hated it.

The quick poll: name 3 Serge Lutens fragrances that you think anyone new to the brand should try.