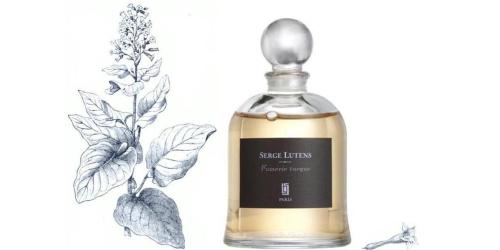 It’s been a long time since I've loved a new Serge Lutens perfume release. Today, I’m reviewing an eleven-year-old Lutens, a personal favorite. I’ve referenced Fumerie Turque1 in almost every tobacco-perfume review I've posted over the years, yet never got around to writing about it. I’m down to my last half-inch of Fumerie Turque, so it’s now or, maybe, never!

Tobacco perfumes are varied, but the actual tobacco note I smell most often in colognes is domineering. Even when surrounded by other strong fragrance notes, eventually, tobacco will triumph. Three oft-used tobacco themes are: sweet (cured tobacco with dried fruit “flavoring,” honey, vanilla, sweet florals, especially rose), dirty (tobacco augmented with black pepper or another pungent spice, cannabis, leather, or musky notes) and smoky (cured tobacco on fire or turned to ash, maybe with some frankincense/incense). Fumerie Turque (alluding to Turkish opium dens) falls into the first category: sweet.

Fumerie Turque goes on smelling like vodka-and-honey-soaked dried fruits (I'll take Lutens' word that what I'm smelling is currant). Next up is caramelized leather with some singed edges. All these sweet and scorched notes blend seamlessly: nothing to make the teeth or nose ache with excess sugar or char. Cured tobacco leaf, with a hint of Peru balsam, arrives in mid-development. An added layer of  smokiness in the heart of Fumerie Turque may be the cade oil, which can smell rough/earthy and "burnt." On some days of wear, I think I detect a deep/jammy rose aroma, especially in Fumerie Turque's sillage (but, strangely, I do not smell rose when I put nose to skin).

Fumerie Turque's base smells heavenly: liquor-y, sweet, full-bodied tobacco mixing with balmy patchouli, benzoin, and background tonka bean (and not the obnoxious tonka-bean-on-testosterone that I smell in so many contemporary men's perfumes). Appropriately, Fumerie Turque dries down to almost "pure" tobacco; its presence is soft, caressing, airy, without being insubstantial (the perfume lasts all day on me).

My bottle of Fumerie Turque was purchased seven or eight years ago when it was available for a brief time in the U.S. in the Serge Lutens spray bottle. I hope the current version, available only in cloches/bell jars, smells as great as mine. Do comment if you've smelled Fumerie Turque recently from a new bottle.