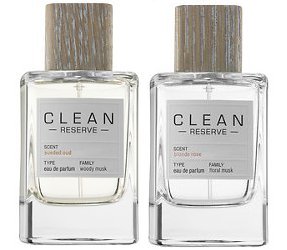 One of my fragrance-loving friends recently opined in a private e-mail that 2015 "was a banner year for perfume B.S." I'm inclined to agree. So many instantly forgettable scents tarted up with fancy packaging and purple prose. So many new collections offering so many new scents at once that I couldn't keep them straight in my head. So many cynical flankers and cheap re-workings of classics.

And what can we say about brands that sabotage their own well-tuned images in order to bring in more customers? Clean was founded in 2003 and established its name quickly and securely with non-perfume perfumes like Simply Soap, Fresh Laundry and Rain. Now it's offering us the Reserve collection, a range of fragrances specifically not designed to smell "out-of-the-shower" fresh. Why? "Each Clean Reserve fragrance was created to be dynamic and evoke, not memories of the past, but possibilities and experiences yet to be discovered." Oh, okay then. And this helpful hint: they are "ideal for layering and blending." (So we can buy more than one!)

The Clean Reserve line has taken up residence in Sephora near other layer-able collections from Philosophy, Commodity and Fred Segal. I've tried two Reserve fragrances, Blonde Rose and Sueded Oud, and while I don't think they're bad, exactly, I just don't understand their raison d'être. (Yes, to make us spend money. You know me, though; I'm always concerned with meaning.) Sueded Oud, for example, bows to the never-ending oud trend with a composition of incense, blue cypress, birchwood, red pimento, honeysuckle, oud, jasmine, magnolia, fir balsam, sarcocaulon [a succulent plant also known as "bushman's candles"], suede, patchouli, amber, praline, musk and olibanum. Not exactly linen sheets dried in the sun, or any other signature Clean motif.

Sueded Oud isn't an intensely oud scent — it lacks any of oud's weird facets. There's nothing "rotting" or animalic about Sueded Oud. Instead, you get cedar, a decent dose of olibanum, some sharp-ish oud "lite" and a smooth, slightly sweet amber dry down. Sueded Oud could actually serve as a good mainstream introduction to unisex resin-wood fragrances. Conceptually, it reminds me of Kate Walsh Boyfriend, whose tacky bottle sneaked an interesting amber-resin fragrance into the women's fragrance category, Trojan horse-like. (Whatever happened to Boyfriend? I haven't run into "him" in a while.)

Blonde Rose, meanwhile, includes notes of aldehydic watery [sic], rose, peony, jasmine, cedarwood, sandalwood and musk. It starts off smelling more like a functional fragrance — a detergent? inexpensive drawer sachets? — composed of pink rose, peony and squeaky white florals. Later on, turns into a honeyed, girlish rose perfume that feels like a blunter Drôle de Rose (L'Artisan). Clean reminds us that "men can wear it too, especially when paired with Sueded Oud" — hard to imagine, and even harder to imagine that people will be scooping up a selection of fragrances priced at $90 each just for the fun of layering. (Although they could pick up the set of travel-sized bottles, I suppose.)

To top things off, there's some verbiage about the Clean Reserve products supporting sustainable plant growth, ecologically sound harvesting practices and fair trade, all of which may be true, of course. However, if you raise an eyebrow when a small company like Raw Spirit goes on and on in earnest about sourcing and labor, you'll raise both eyebrows now.

As usual, I'm probably missing the commercial point here while I get caught up in aesthetic concerns. Are there any long-time Clean fans out there? If so, have you tried anything from this line? What did you think?

Clean Reserve Blonde Rose and Sueded Oud are available as 100 ml Eau de Parfum ($90 each) at Sephora. A six piece layering set is $45.