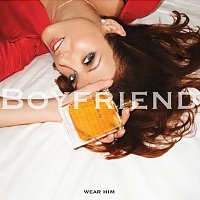 I remember meeting my freshman-year roommate on the very first day of college. When our parents had departed and we stood alone in the room, her first full sentence to me was, "Do you have a boyfriend?" What a strange way to begin a conversation and a potential friendship, I thought. I had just finished painstakingly arranging my half of the room. Why didn't she ask me about my books, my posters, my music collection? Why didn't she ask me, better yet, about myself?

My initial reaction to Kate Walsh Boyfriend was similar. Boyfriend, whose tagline is "Wear Him," is intended "to capture the scent of a guy on a girl: a man's cologne mixed with perfume, the smell that lingers on the skin." But why would I want a perfume that makes me smell like some imaginary male companion, particularly in a scenario written like a romance novel?  ("She inhales his shirt, taking in the scent of the man she loves. It lingers on her clothes, her sheets, her hair—all over. Imprinted on her body and in her mind, it radiates within her, filling her with feelings of warmth and desire.") And why would I want to own and display a perfume bottle marked with various masculine first names? Are they meant to signify past boyfriends? Or am I supposed to find my real-life companion's name on the list? (My husband's name is there, for the record. But what if it weren't?)

Boyfriend's notes are listed as dark plum, myrrh, night blooming jasmine, benzoin tears, skin musk, golden amber and vanilla woods. That list didn't really raise my expectations — those "ingredients" have all appeared many times before, even in combination — but the fragrance itself did make me sit up and take notice. It's unlike anything else at the feminine end of Sephora's fragrance wall. In fact, it could easily be a masculine fragrance, albeit a warm and slightly fruity one. There's plenty of amber and sweetly resiny woods and hints of patchouli. I have to strain to catch the floral notes, and the plum really is darker than I would have forecast. The base is a smoky-vanilla skin scent. Boyfriend isn't my usual "type," but it's well done, and I can't help admiring it. It has more in common with recent amber-based niche releases than it does with anything else in its own pink-lychee-dominated marketplace. 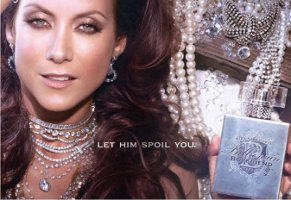 For Kate Walsh's new release Billionaire Boyfriend — "Let Him Spoil You" — we are now encouraged to "imagine a drive down the Amalfi coast in a vintage Alfa Romeo, dripping in diamonds and radiating pure sensuality and passion." Is the Boyfriend at the wheel? Are we acting as his Bond Girls? (I never coveted their roles.) More confusingly, one accompanying commercial seems to cast us as extras in a hop hop video, instead. Is that commercial tongue-in-cheek? Apparently so. Is the description of this fragrance — as "a lavish, decadent expression of seduction and opulence" that "plunges straight into the heart of its wearer, connecting with their lustful and lavish desires" — similarly parodic? And why does the container, supposedly modeled after a "special reserve vintage champagne bottle," look so cheap in person? (The silver layer appears ready to wrinkle and pucker under its clear topcoat, especially at the corners.)

The listed notes for Billionaire Boyfriend (developed by perfumer Marypierre Julien) are bergamot, tangerine, lush green leaves, black jasmine, velvet orchid, gardenia, patchouli flower and golden amber. There's some overlap with "Everyday" Boyfriend, as I'm now calling him, in the amber base notes. However, the overall experience of the Billionaire is quite a different one. This Boyfriend begins with a citrus-green accord, but its heart brings the real surprise: a raw, gutsy jasmine note that rarely appears in mainstream fragrance. It doesn't have quite the animalic elegance of Serge Lutens A la Nuit or the natural feistiness of Lust from Gorilla Perfume at Lush, but it's there, and it's unexpected. However, it's not allowed to occupy center-stage for long: Billionaire Boyfriend soon loses its nerve and folds the jasmine back into thin layers of sheer amber and even sheerer patchouli, with some lingering traces of sour oranges. This fragrance has less staying power than the "Everyday" Boyfriend.

I had no idea who Kate Walsh was until these fragrances were released, and I'm still puzzled by her fragrance-selling persona. The smooth, semi-masculine feel of Boyfriend and that nearly indolic jasmine in Billionaire Boyfriend make me suspect that Ms. Walsh is a real perfume-lover in her private life. On the other hand, the promotional copy, the visuals, and the "webimercials" are truly puzzling. Why tag a parody onto a relatively serious fragrance (or two), especially when you're selling the fragrances to an audience that probably has nothing against conventional fragrance marketing in the first place? Maybe I'm just missing the point.

In her promotional videos and interviews for the Boyfriend line, Kate Walsh promises more Boyfriends to come, perhaps even a "Boyfriend Store." I can't help but wish that these fragrances were being marketed under another gimmick. I do have my own fragrance-related fantasies, but they don't involve another person's scent dominating my own, or a man showering me with diamonds. I'd rather choose perfumes that enhance my own personality and mood, and I'd rather purchase my own (preferably vintage) jewelry. If a "Bookish Boyfriend" or a "Bohemian Boyfriend" ever appears, maybe I'll give it (him?) a try.