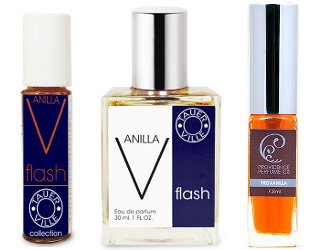 Indie line Providence Perfume Co calls their new Provanilla a "lavish celebration of true vanilla", and it features "five different varieties of vanilla from Madagascar to Mexico". Also in the mix: rose, balsams, myrrh, coconut pulp and a "clean aquatic accord". The clean aquatic accord would usually scare me, but since Providence Perfume is a natural brand, there's no need to worry about calone. The opening is bright and watery, and yes, even a bit cantaloupe-ish, but the accord is not assertive enough to overwhelm, rather, it serves to soften the gourmand aspects of the vanilla and coconut, and melds perfectly with the soft rose in the heart. Farther along, it mostly disappears, and Provanilla gets slightly warmer and spicier, but it stays in the mid-weight range — this is not the sort of vanilla that you'll have to put away when summer arrives.

Provanilla is a delicious fragrance, just foody enough to satisfy lovers of vanilla gourmands, but not so dessert-like that anyone couldn't enjoy it. Very nicely done, and to my nose, could be easily worn by either sex.

Vanilla Flash is the second entry in Andy Tauer's new Tauerville line. The distribution for Tauerville is slightly different from that of Tauer Perfumes, but it looks like that won't matter for most consumers: in the US, at least, all the regular Tauer retailers seem to be carrying the range.

I believe Andy Tauer said that Vanilla Flash was the sort of vanilla he'd like to wear himself, and it's quite different from Provanilla. First of all, it's not even slightly foody. It's also warmer and drier, and while it likewise has rose (and plenty of spice), what you'll note most are the darker elements: patchouli (clean) and tobacco. It's slightly earthy, slightly boozy, and slightly musky early on; later, it's more of all of that plus a little thread of smoke. I had not thought Provanilla was creamy, but after smelling it next to Vanilla Flash, I decided yes, it was creamy, and Vanilla Flash is decidedly not. Vanilla Flash is also heavier than Provanilla, although it's hard to tell how much because I'm rolling the one and spraying the other. Vanilla Flash, at any rate, does not smell like something you'd spray with abandon on a hot day.

I hesitate to call Vanilla Flash masculine because a woman could easily wear it, but it's farther along on the woman-to-man scale than Provanilla, and women who find tobacco difficult to wear may not want to buy Vanilla Flash unsniffed (if it helps, the fragrance it is getting the most comparisons to is Tom Ford Tobacco Vanille). But do give it a try.

Do comment if you've tried either fragrance, or if you have a vanilla you'd like to recommend to your fellow readers.