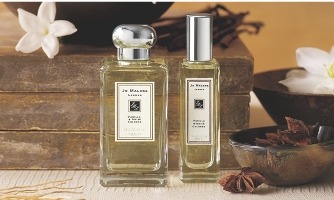 Vanilla & Anise is new from Jo Malone; it's meant to "...evoke the moment that vanilla orchids bloom at day-break in Madagascar", Madagascar being the world’s largest producer of vanilla.

Vanilla & Anise starts out bright and citrusy. It's slightly sharp in the early stages, and very fresh. Patty at Perfume Posse found it melon-y aquatic, but I hardly noticed until I sprayed it on paper. On skin (my skin, anyway), the fresh notes pass by in a flash. It sweetens up quickly but it never gets more than slightly sweet, and the vanilla is balanced by a slightly bitter edge in the mostly transparent florals: it reminds me of wildflowers more than tropical florals (the notes: bergamot, neroli, wild fennel flower, star anise, oleander, tuberose, frangipani, purple vanilla orchid, clove, white amber, vetiver, vanilla bourbon absolute and tonka bean). The licorice notes are subtle, and the base is pale and woody, and just slightly earthy.

I like Vanilla & Anise. It's pleasant and wearable without being dull or generic. It won't suit everyone, and it might disappoint anyone looking for a vanilla comfort scent (it's no such thing) or a foody gourmand (it isn't that either). There's just enough warmth in the base to keep it from being a summer fragrance, but still, if you're looking for something warm and spicy for winter, that's another thing you won't find it here: it's just too sheer. I usually wear fragrance lightly — typically 1 spray is plenty for me, but with Vanilla & Anise, I found 8 or 10 sprays worked best, otherwise the whole thing fell flat in 20 minutes. Heavily applied, it makes a better showing; still, it isn't a powerhouse, and I wish the anise was more pronounced and longer lasting.

I've read a few complaints about Jo Malone lately; some people feel that the brand has changed direction since Jo Malone left in 2006 (the company has been owned by Estee Lauder since 1999). I was never a huge fan of the brand to begin with, and from my perspective, their more recent fragrances are by and large more interesting than the earlier ones. Of their most recent releases, I liked the Kohdo Wood Dark Amber & Ginger Lily best, but I also liked the Sweet Lime & Cedar. This one comes in third — it's not going on my buy list, but I'd happily wear it if I had it.