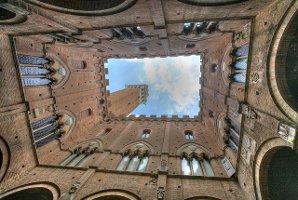 Eau d'Italie's Sienne l'Hiver has been hanging around in my purgatory basket1 since it launched back in 2006. I've taken it out a few times to give it another shot, and then I've put it right back where it was. I don't know what keeps me from moving it to the "no" pile. Perhaps it's because so many people love it,2 or perhaps it's because it's by perfumer Bertrand Duchaufour? Or perhaps it's because it is named for Siena. I try not to get too wrapped up in fragrance back stories — they so rarely resonate with the juice, and often that's just as well — but Siena is such a lovely place, wouldn't it be nice if it had a fragrance to match?

The sample hung around in my purgatory basket long enough that it got mostly used up, and what was left was rather stale, and who knows, maybe the stuff has been reformulated in the interim. (While it languished, Eau d'Italie redid their packaging; the bottles still look like functional products instead of luxury perfumes, but now they look a little more expensive). So I got another sample.

The opening is, briefly, cold air tinged with green, then it moves indoors, and we get a rush of sensations: something earthy that could be the "white truffle" listed in the notes,3 something briny that must be the "black olive accord", something lightly but persistently sweet (at first I called it fruity, then I changed my mind, then I decided that no, it was definitely fruity), quite a bit of cold iris, a bit of something nutty (some note lists include roasted chestnuts), some light woods, much later, a little whiff of something like woodsmoke. I decided that the iris reminded me of the "stones of a temple in a far-off land" from L'Artisan Dzongkha (also by Duchaufour), so I put that on too; next to Dzongkha, the relationship is clear but Sienne l'Hiver smells oddly bland. I wondered about the papyrus, which I don't really notice, so I sprayed on some L'Artisan Timbuktu (again, by Duchaufour); next to Timbuktu, Sienne l'Hiver could be some residue left from the perfume you got on your scarf two weeks ago and that hasn't entirely faded away.

I decided to stop comparing it to other fragrances, and I wore it again a few times by itself. It is a quiet scent: the description I gave above doesn't adequately explain how quiet it is, or how clean (or how unfoody, despite the fact that the olive note is always what I remember later, after the whole thing has faded away). It's easy to forget you're wearing it; even when I notice it, I tend to forget it's a perfume. It does not bore me, mind you — when I remember to pay attention to it, I'm interested — but nor does it draw me in, and I was fascinated, later, to read in the description at Luckyscent: "this is not designed to entice or bedazzle, but to lead you into deep conversations over an espresso with a long-lost friend". Aha. I have plenty of fragrances like that, I would think, and also plenty of fragrances that, like Sienne l'Hiver, might reasonably be accused of not really working as personal fragrances at all. That's ok. I do not demand of my perfume that it work well as a personal fragrance, and I don't demand that it entice or bedazzle others, but it has to entice me, doesn't it? Sienne l'Hiver, in the end, all too successfully evokes the dank chill of my least favorite season, winter. At least, I think it does. I am moving it into the "no" pile for now, we'll see if I change my mind next week. 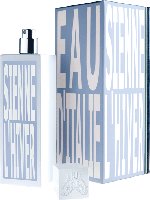 Eau d'Italie Sienne l'Hiver is available in 100 ml Eau de Toilette. It is unisex, and Eau d'Italie calls it a "smoky chypre". The lasting power is quite good. For buying information, see the listing for Eau d'Italie under Perfume Houses.

Another note: top image is Siena straight up by jurvetson at flickr; some rights reserved.

1. The purgatory basket is where I keep fragrances I can't make up my mind about.

2. Or do so many people love it? I will be curious to see what people say in the comments. It does seem like it comes up frequently, and Chandler Burr called it "virtually perfect". But there are also quite a few "meh" reviews: see the Non Blonde and Pere de Pierre, among others.