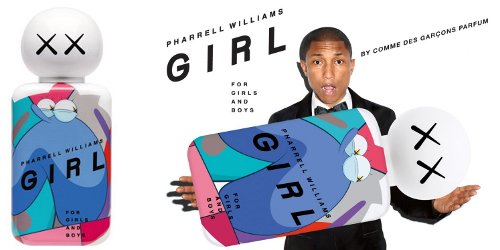 Regular readers can probably already guess that I was barely aware of Pharrell Williams' existence before he announced his debut fragrance with Comme des Garçons, Girl — he's not the first celebrity that entered my radar via perfume, and he won't be the last. In the interest of research, I did listen to a couple of songs while writing this review (Happy got stuck in my head for several hours, thank you) but other than that, I still know little enough. He's won some Grammys, and everyone but me knows who he is.

With any luck, Happy will not be an ongoing earworm, but Girl will almost certainly take my vote for celebrity fragrance of the year. Of course, it hasn't all that much competition in that category, and perspective does matter. If you adore Pharrell Williams but have never tried anything from the Comme des Garçons brand or the perfumer (Antoine Lie), Girl might be a surprise, and if the reviews on Sephora are to be believed, it may or may not be a good surprise. If you're a big fan of celebrity perfumes and want something a little more sophisticated than the usual fare on offer — and you don't mind paying more — Girl could be just what you've been waiting for. If you're a perfumista and a longtime Comme des Garçons fan, Girl might strike you, as it did me, as hardly the best they can do, but an awful lot better than it might have been.

Williams was reportedly inspired to make Girl with Comme des Garçons after smelling Wonderwood, a fragrance which didn't make me yawn, exactly, but which didn't inspire me to pull out my wallet either. Mr. Williams was...

...enamored by [Comme des Garçons’] ability to deliver wood to the masses in the way that they have.

Girl takes things a step further in the "to the masses" department, that is, it's quite woody, but in a softer, more toned-down way. The opening is herbal citrus (featuring a completely declawed lavender) over what is already a strong but smooth (and pale) musky woods. It gets peppery-spicy fairly quickly, but again, if you've tried Wonderwood, you'll be struck by how much tamer Girl is. The floral notes in the heart are transparent and tinged with green. A dollop of creamy iris adds a powdery finish, and keeps Girl from leaning too far towards the masculine side of unisex (albeit, not enough for some of the reviewers on Sephora).

The dry down is a milky cedar-y woods. There's a bit of vetiver but it's not overly earthy. It's sweet-ish — not as sweet as your average celebrity fragrance, and for that matter, it's drier than many recent mainstream men's fragrances  — but it's sweet, and has a slightly nutty undertone.

Verdict: For a celebrity fragrance, Girl is fantastic, and I adore the packaging on the large bottle. I salute Pharrell Williams for his good taste, and for not, as so many in the music business have, marketing crap fragrance under his name in order to make a few extra bucks.

For a Comme des Garçons fragrance, Girl is, as I said above, not their best, but it's well done, enjoyable to wear and possibly fun to layer (I have not experimented yet). I do like it better than the comparatively blunt Wonderwood. I bought the 10 ml bottle unsniffed, and I am in no way displeased with my purchase. I will have no trouble using it up.

Kudos to all involved for including the 10 ml size, and boo hiss for making it so emphatically dull — even a little design on the cap would have been welcome. 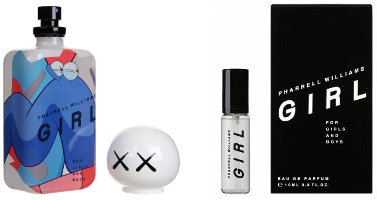