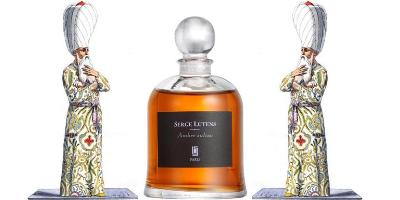 Ambre Sultan* was my first Serge Lutens perfume. I ordered it from England because, in early 2000, there wasn’t a bottle to be had in the United States. I purchased Ambre Sultan unsniffed because — who doesn’t like amber?

I’ve written about “amber” before, but since that post, I’ve come to prefer “tough” ambers over sweet vanillic amber blends (which many perfume lovers categorize as easy-to-wear “comfort scents”). Of course, I have many perfumes in my collection with amber-y bases, but I usually own just one ‘clear-cut’ amber perfume...and for over a decade that’s been Ambre Sultan.

Ambre Sultan starts off with a dual personality: both syrupy and dense with sticky resins, and severe and bitter with dry oregano and bay leaf aromas; its early stages of development include a dried flower scent (immortelle?) Smelled up close, Ambre Sultan presents an atypical take on amber (brash, not polite; rough, not smooth). I also can detect myrtle; some people think myrtle smells “medicinal,” but I wouldn’t use that word to describe the herbal/vegetal nature of Ambre Sultan. I prefer Serge Lutens’ idea: "I would love to tell the Arabian history through perfume creations. I think women are now mature enough for another type of perfumery — one that can be linked to civilizations." Though I’m sure women will be “amused” their overall maturity level is gauged sufficient by Monsieur Lutens to appreciate his perfumes (perhaps the translation of his statement was poor), I like his aim, long since adopted by other perfume houses: to explore the world’s cultures with scents. Ambre Sultan smells a bit “antique” and has a “long-ago, far-away” quality I love.

During the extreme dry-down, Ambre Sultan becomes more of a “classic” amber mix of vanilla (not too sweet), musk (not too animalic), sandalwood (just right), benzoin (adding a hint of incense) and patchouli (not too assertive and, blessedly, without the now-ubiquitous “cocoa” note one finds in patchouli perfumes everywhere).

Ambre Sultan is unisex and has great persistence and sillage; it has also kept me loyal for a long, long time. You can say I practice “ambergamy.”