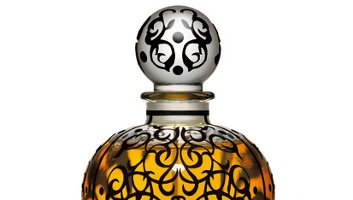 Two quick and somewhat contradictory thoughts sprung to mind when I first smelled El Attarine, the latest fragrance from the Serge Lutens exclusive* line. The first was to ponder how much longer Serge Lutens could possibly go on releasing three new fragrances a year based on this same rather narrow thematic palette. To my nose, many of the newer releases smell like riffs on older scents in the range — interesting riffs, to be sure, but how many riffs do most consumers, even rabid Serge Lutens fans and collectors, want or need? My second thought was simply to wonder how long it would be before El Attarine was selected as the limited edition export of the year so that I could buy a bottle.

The Serge Lutens ad copy, as always somewhat less than helpful, describes El Attarine as "gold, sun-drenched topaz, everlasting flowers and saps". El Attarine's opening is strong, dense citrus; it very quickly devolves into that blend of stewed dried fruits and curry spices that Serge Lutens fans know so well, albeit done here with a somewhat more pared down approach. The heart is a blended floral dominated by immortelle. Immortelle is not a favorite note of mine; it is too frequently given a sweet, syrupy finish that I find overwhelming. In El Attarine, it is honeyed — the fragrance does indeed achieve a golden glow — but not so much so that it feels claustrophobic.

Serge fans will likewise recognize the woody, pencil-ish notes and middling-skanky musk in the base, finished off here with just a pinch of powder. It's not a light scent, but it's quieter than some of the others in the line. Luca Turin noted that "You certainly don't go shopping for fabric softener wearing this",** but if forced to choose, I'd be more likely to run my errands wearing El Attarine than Arabie, a fragrance cited by many perfumistas as the main source of inspiration for El Attarine's motifs (other likely suspects that have been mentioned, and all with good reason, include Muscs Koublaï Khan, La Myrrhe and the whole of the Bois series leading right back to Shiseido Féminité du Bois).

El Attarine is my favorite from the Serge Lutens line since 2004's Chêne. Very much worth a try, if you can get your hands on it.

Serge Lutens El Attarine is available in 75 ml Eau de Parfum. The bottle shown above is the special limited edition (850€, 30 numbered bottles available); it is also sold in the "plain" bell jar (110€).

* For buying information (including an explanation of the difference between the exclusive and export ranges) see the listing for Serge Lutens under Perfume Houses.

** From the Fall 2008 newsletter supplement to Perfumes: The Guide.