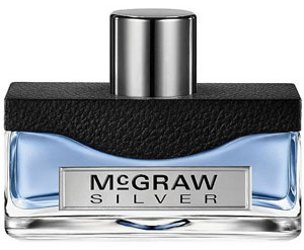 Yesterday we reviewed Faith Hill True, and now it’s time to move on to her husband and Tim McGraw Silver. I liked McGraw by TimMcGraw and thought Silver was worth a try.

Silver is our only masculine offering of the week. What makes a particular fragrance “masculine” to you? For the most part, I ignore the distinction between feminine and masculine fragrances — except in the case of a fougère.1 Something about their in-your-face quality, how they’re so often over-applied, the short leap between many and Drakkar Noir moves a fougère far, far from a woman’s dressing room. Silver is an aromatic fougère.2

Here’s what the PR machine says of Silver: “Capture the excitement of city life with this men's McGraw Silver cologne spray. This fresh, clean fragrance by Tim McGraw showcases your modern style.” The photo accompanying the ad shows McGraw wearing a black cowboy hat and a belt buckle the size of a hubcap. Silver skyscrapers flank him. He doesn’t look particularly modern (to me, anyway) despite the black and white palette. And besides Silver’s wallop of lavender, I wouldn’t call it “fresh” or “clean.”

Silver is a fulsome fougère with its cool lavender warmed by wood. Some of the wood is soft, like sandalwood, and some smells coniferous, but not as sharp as pine pitch or cedar. The fragrance’s orange flower and musk might be intended to inject a soapy clean feel, but if so, the rest of Silver swallowed it whole except for a thin wash on its edges. I was tantalized to see saffron listed in the notes, but that, too, is subtle and hard to tease out. 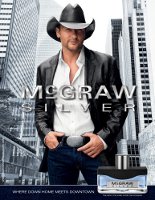 Basically, Silver packs lots of attitude, pulchritude, and warmth. It’s big, and to me it’s more interesting than many fougères out there even if it isn’t jaw-droppingly original. But it’s also a little like the guy who drives a Hummer. You have to ask what he’s compensating for.

Tim McGraw Silver cologne spray is available in 30 ml and 50 ml sizes, and costs between $11 and $35, depending on where you buy it. It’s available online and from many drugstores and big box retailers.

1. For newer perfume enthusiasts, “fougère” means “fern” and is a type of fragrance featuring lavender with coumarin and moss. Don’t ask me why a perfume named “fern” smells of lavender.

2. Really, not many fragrances can embrace lavender and still be subtle. To me, Guerlain Jicky succeeds, but not everyone can pull it off (although that might be more about the civet than the lavender). The same goes for Christian Dior Dune. Patou Moment Supreme might be one of the easiest lavender-centric fragrances to wear.