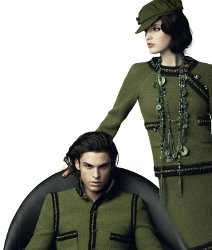 Today's community project: wear a fragrance by Chanel! Do tell what you picked, and how it's working for you today. Does it say 'Chanel' to you?

If you're not wearing Chanel for whatever reason, we don't mind at all — do chime in with your scent of the day anyway.

I'm wearing Cristalle, in the original Eau de Toilette format. It launched in 1973, after the death of Coco Chanel but before Karl Lagerfeld came on board. It only came in Eau de Toilette until 1993, when they added the Eau de Parfum in effort to get women to wear it year-round instead of only in the summer.

I smell mossy and citrus-y, and fresh, if you're willing to allow that a crisp classic chypre can smell fresh. Cristalle was the first Chanel scent I ever wore, and until I became a perfumista, the only Chanel scent I wore. When I first bought it, it did not say Chanel to me, and that was a plus: I thought of Chanel perfumes as fusty and old-fashioned. Now, of course, Cristalle is old-fashioned, and younger Chanel consumers are wearing Chance flankers.

Reminder: next week, on Friday the 13th, wear your own version of 'Eau de Protection', i.e. something that brings you good luck or otherwise makes you feel safe and happy.