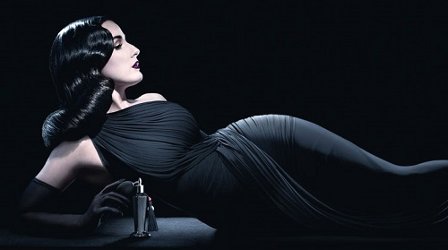 I happen to be a fan of the model and burlesque performer Dita von Teese; I like her retro style in fashion and grooming, as well as her highly stylized and seductive performances (at least, the bits I've seen online). She really does seem well-versed in the feminine style of the 1920s-50s, and she has occasionally mentioned her favorite perfumes in interviews: Love's Baby Soft in her teen years, followed by Cacharel Lou Lou and Houbigant Quelques Fleurs.

Her first fragrance in her own line, released simply as Dita von Teese in 2011, was developed with perfumer Nathalie Lorson and includes notes of bergamot, peony and Bourbon pepper; Bulgarian rose, Tahitian tiare flower and jasmine; and incense, patchouli, musk, guaiac wood and sandalwood. In the press release for this fragrance, von Teese said,

I wanted to do something very sensual, sleek and simple that speaks of wanting to be a grown-up, sophisticated woman, who is in charge of her life. I just love the idea of something that is both very good, sophisticated and elegant, but also a little bit mysterious, dark and dangerous. Those two things together become something very special and really magical. I wanted a perfume that feels like that.

Whereas so many mainstream fragrances (not to mention most celebrity fragrances) open with a burst of fruit-juice notes, Dita von Teese starts off dry and almost androgynous. Its opening includes plenty of pepper dusted over something that reminds me of vetiver, although it's not listed in the official description. There's a nose-tickling effect from the pepper (and some aldehydes?), plus a sharper-edged woody note (an early appearance by the guaiac?), and then the fragrance gradually softens and turns more classically feminine. I really don't notice the tropical influence of any tiare, but there's definitely some rose, some non-animalic jasmine, and a dusting of powdery iris.

Dita von Teese is an Eau de Parfum, and it has pleasing depth and sillage. On the other hand, I really don't find it overly vampish or powerful. I've worn it — judiciously applied — to the office, where I felt very comfortable swathed in its woodsy-floral warmth.  The flowers and woods don't feel "natural," strictly speaking, but they're not cheap-smelling, either. The incense note is mild, as incenses go, and it adds a base to the bouquet of the heart notes. The total effect is lush, yet restrained. If Dita von Teese's fragrance were a Dita von Teese striptease, it would begin as a tailored suit with a pencil skirt, and slowly work its way down to satin lingerie and a little fur scarf.

If you've read many of my reviews, you know that I do like feminine, old-fashioned florals, so you won't be surprised that Dita von Teese gets a flirtatious wink of approval from me. It's worth a try if you like neo-retro floral perfumes like Frederic Malle Lipstick Rose (although Dita is definitely less plush and sweet) or Jul et Mad Stilettos on Lex, or if you favor glamourous vintage fragrances for special occasions but need something a little more discreet (and more affordable) for everyday life.

I should also say a quick word about the packaging: I've purchased a 20 ml bottle, which is a purse-size atomizer (also designed to be laid down on a dressing table, etc.) and I'm very pleased with the quality of the ribbed black glass and the little black tassel (with a single lipstick-red bead!). The box is pretty flimsy, but I'd rather see a company cut corners on outer packaging than the bottle or, obviously, the fragrance itself. Overall, though: very nicely done, and worthy of its namesake.