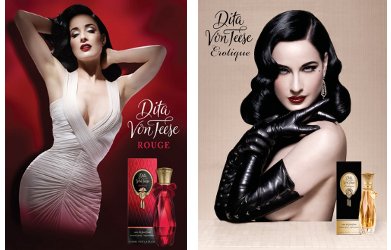 Like drag queens, burlesque performers fascinate me. They’re courageous enough to flout convention and adopt a persona that isn’t accepted at P.T.A. meetings, and they do it all in front of an audience. Although they might perform simply for their own satisfaction, there’s a reason the house is full. Some us wish we had the guts to be ourselves in such an outrageous way.

Dita Von Teese is counting on it. Besides her first perfume, Dita Von Teese, she’s released three other fragrances playing on angles of her burlesque persona: Fleurteese, which I haven’t smelled; and Rouge and Erotique, which I review here. You may not want to put on a corset and dance in a giant martini glass, the fragrances seem to say, but give us a try for a taste of that feeling.

Rouge’s notes include bergamot, pink pepper, lapsang souchong tea, magnolia, amber, gaiac wood, sandalwood, patchouli and tonka. In a nutshell, it’s “sexy dressing table.” Rouge opens with a spiky whiff that reminds me of spray paint. However, it quickly softens and sweetens and settles into a powdery raw wood. Rouge holds on to that sleek woody powder until it fades, a good six hours later.

To me, Rouge is a butch take on the classic rose-violet cosmetics powder fragrance. Swap out the candied florals for vague smoke and sweet wood, but keep the silky powder, and you get Rouge. Whether this is a warning against it or motivation to try it, Rouge could be Lorenzo Villoresi Alamut made by graffiti artists in a warehouse.

Erotique is richly aldehydic at first, but right away it falls off its tingly cliff into the woodpile. This woodpile isn’t a stack of mossy logs. It’s a heap of jagged cedar planks, splintery sandalwood, ambery gaiac and enough incense to lend a raw tang reminiscent of oud — but not oud. Other reviewers mention leather, but I don’t smell it. Rose barely permeates the fragrance. It’s more like viewing Erotique through a burgundy-tinted window than smelling a rose bouquet.

Erotique comes in a girly bottle with a lock and key charm, but it’s a unisex fragrance and possibly too muscular for many women. If you wear Maitre Parfumeur et Gantier Route du Vetiver easily, give this a try. Despite Erotique’s presence, it fades on my skin after about five hours.

If Rouge and Erotique rang in at the usual department store prices, I’d probably give them a pass because they're not exactly my taste. But they’re so much more interesting than the usual celebrity fragrances, and they're a bargain. Although Dita Von Teese fragrances are difficult to find in stores, an internet search turns up a 20 ml spray of Rouge Eau de Parfum for $14.97 and a 40 ml bottle for $24.96. Erotique is a little more difficult to track down, but I found a 40 ml bottle of Eau de Parfum for $30.