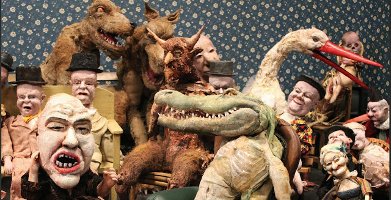 'Scent sculptor' and perfumer Christophe Laudamiel is participating in Armchair Parade, a multimedia installation at Dillon Gallery in New York City. Also on view: puppets by Julian Crouch, films by Ragnar Freidank and The Big Boing (a handmade, 24-foot lamellophone created by Mark Stewart, which can be played by visitors).

Although the work cannot be seen or heard until one descends into Dillon Gallery’s vaults, visitors begin experiencing Fantastical 2014, Laudamiel’s contribution to Armchair Parade, as soon as they enter the building. The pioneer of scent-as-fine-art, Christophe Laudamiel, whose first solo gallery show Dillon presented to acclaim in 2012, is constructing numerous “smell sculptures” that will fill the first floor. Laudamiel’s “septology” of seven scents—including “Roasted Piglets,” “Bay Horse,” “Sunbathing Devils,” “Frog,” and “Feathers & Fur”—are based on the characters and themes that feature visually, sonically, and tactilely downstairs. Fantastical 2014 represents Laudamiel further exploring cross-disciplinary collaboration, which he has previously undertaken in Green Aria —a ScentOpera with music composers Nico Muhly and Valgeir Sigurdsson, at the Guggenheim—and other works.

Armchair Parade is open from February 13 through March 30, at 555 West 25th Street in Manhattan.